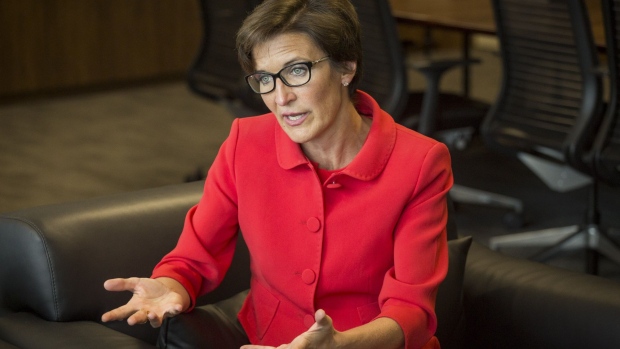 (Bloomberg) -- Citigroup Inc. will eventually expect borrowers to have a credible plan for measuring and reducing their carbon footprint as part of the bank’s pledge to achieve net-zero greenhouse-gas emissions.

The firm is still formulating plans for how it will go about pulling off its pledge, Chief Executive Officer Jane Fraser said Tuesday at the WSJ CEO Council conference. When asked how the firm would respond to a natural-gas driller looking for a 30 year loan to build infrastructure, Fraser said it would start with a conversation.

“If they don’t have a credible plan and they’re not able to come up with targets and metrics and disclosures, then it will be a shorter conversation,” Fraser said.

Citigroup’s climate plans are a key push for Fraser, who made the pledge to achieve net-zero emissions by 2050 on her first day as CEO in March. Fraser was one of many financiers who descended on Glasgow earlier this year for a climate summit, where she called for global leaders to set consistent sustainability standards that would make it easier for clients to invest in green projects.

Fraser said Tuesday her firm isn’t a fan of the idea of simply asking clients to dispose of any so-called “brown” assets, which would just shift the problem to a new owner. She cautioned that banks also have to consider the ramifications of quickly pulling support for carbon-laden industries without back-up plans.

“If we’re shutting down a lot of brown assets in certain communities and then we’re not providing alternative employment sources and driving finances into local entrepreneurs and building out the alternatives, this will be a very unpleasant and socially unpleasant transition that we go through,” she said.