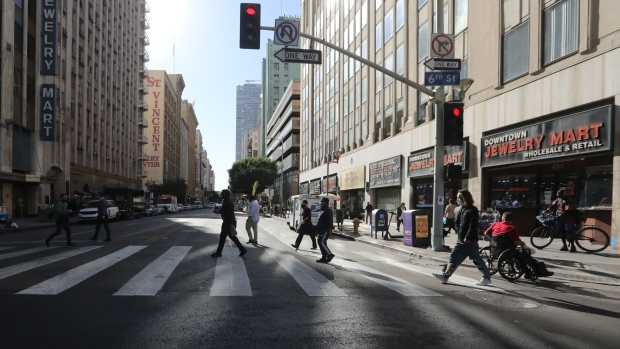 Pedestrians cross a street in downtown Los Angeles, California, U.S., on Thursday, Dec. 3, 2020. Los Angeles Mayor Eric Garcetti issued an order for residents to stay at home, warning that the city is approaching a “devastating tipping point” in its fight against Covid-19 that would overwhelm the hospital system. , Bloomberg

(Bloomberg) -- Cities will likely have to increase retirement contributions as public pension returns are battered by historically poor financial markets, according to a report released Monday by S&P Global Ratings.

“S&P Global Ratings anticipates that market declines in 2022 and the threat of a recession will likely lead to the need for increased future contributions, in most cases,” analysts led by Stephen Doyle wrote in a report. They said that the positive market returns seen in 2021 have already been, or will be “erased” this year.

Pension funding ratios for the 20 largest US cities increased to a median of 78.5% for the 2021 fiscal year, up from 71.5% the year prior, the report said. The gains are likely to be reversed because of poor market performance, higher personnel costs and rising inflation, S&P said.

Both equity and bond markets have plummeted this year as inflation surges and fears of a global recession mount. The S&P 500 is down more than 23% since January while US investment grade fixed income assets have fallen about 14%, according to Bloomberg’s aggregate index.

“Increasing pension contribution costs will compete with growing expenditures and potentially tighter operating margins if revenues weaken or decline,” the analysts said, detailing that the company’s “focus” will be evaluating how cities balance budget pressures with ongoing pension reforms.

Out of the 20 cities S&P had surveyed, San Jose, Los Angeles, and Chicago have the highest current pension costs, “though they have budgetary flexibility that we view as strong-to-very strong, which could help incorporate expected increasing annual costs following declining asset returns in 2022,” the analysts said.

Indianapolis, San Francisco and Washington, D.C. have more assets in their pension trusts than liabilities, while Chicago continues to be an “outlier” with the highest current pension costs and net pension liabilities of the surveyed cities.

S&P found that 13 of the surveyed 35 pension plans will need to increase their contributions in order to maintain their current funded ratios.