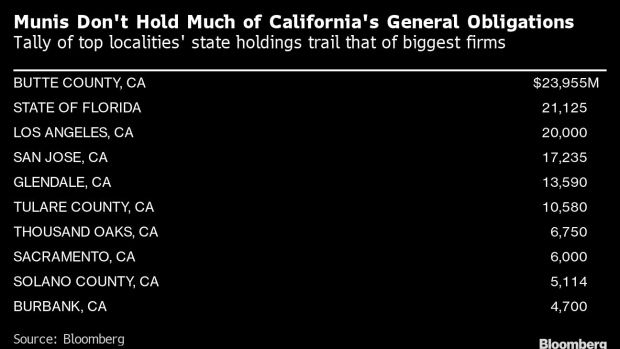 (Bloomberg) -- At the Cabrera Capital Markets office in Chicago, public finance bankers Brian King and Edward Kurth were kicking around ideas when it occurred to them: amid the current wave of taxable deals, why not expand the investor base by pitching municipal governments themselves to buy the debt?

Municipal treasurers aren’t typical buyers of the kind of the debt they sell themselves. They don’t benefit from the tax exemption on most muni bonds, and the assets they buy tend to be short-dated. Indeed, state and local governments hold just $20 billion of municipal bonds, a fraction of the universe, according to Federal Reserve data.

But, as King said in a phone interview, municipal issuers always ask underwriters to find more buyers for their bonds. The issuers themselves don’t get calls from muni-bond salespeople, and they sometimes turn to corporate bonds to invest their cash. But the rise of taxable municipal sales provides a unique entry.

“It struck us that this would be a natural way for them to vastly increase their investor base,” King said. “And at the same time provide an opportunity for municipal treasurers to make what would be really good investments in municipal bonds of other governments.”

Since their epiphany at the middle of last year, King said, Cabrera salespeople have ramped up their calls to local governments to buy new muni deals. He and other Cabrera bankers have also pitched government issuers about the potential of tapping this investor base and recommended moves such as marketing directly to governments or even giving such buyers a preference during sales.

King doesn’t expect a radical shake-up of the investor base. Still, the pitch shows how underwriters are adapting to developments in the staid municipal-bond market and trying to keep competitive with new ideas. More banks are vying for deals, to the benefit of issuers.

There are about 50,000 governmental units managing more than $7.6 trillion of funds in the U.S., according to a Cabrera presentation in June to the California treasurer’s office obtained through a public-records request.

Underwriters could pitch municipal buyers for the short maturities -- six months to five years -- that they are interested in, and if such investors get first dibs, corporate buyers would then have to buy debt further along the curve, King said.

The record pace of taxable deals is slowing after last year, however. Still, King said the idea holds value as a long-term approach to building up a diverse investor base. He said Cabrera is recommending to their issuer clients that they tell their other bankers to solicit relationships with government buyers.

Local governments hold assets that they can sell quickly in times of distress, with their investment policies often requiring highly-rated, short-dated securities.

And if there’s a default, a city would find itself in the politically awkward position of being a creditor to another local government, he said. For Tim Schaefer, California’s deputy treasurer, Cabrera’s pitch was interesting, although “it’s not necessarily as applicable to the state of California simply because of the weighting we give to selling tax-exempt debt and longer-dated debt,” he said. Indeed, the holdings of top 10 local-government investors of California’s general obligation bonds tally about $129 million, much less than the $6.6 billion held by the state’s biggest investor, Vanguard Group, data compiled by Bloomberg show.

Still, Schaefer said, other jurisdictions should “absolutely” consider marketing their taxable deals to others.

“It would be unwise to not explore how to expand your buyer’s market,” Schaefer said. “You won’t know until you try.”