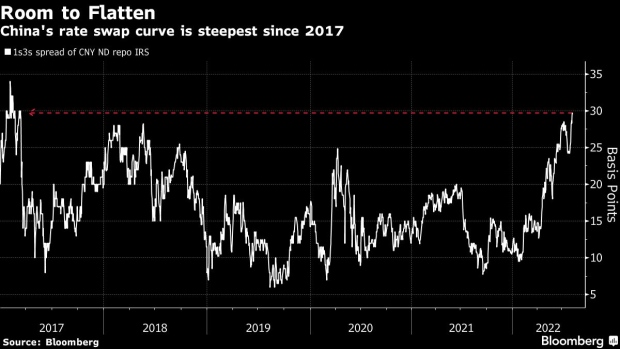 China Customs officers raise a Chinese flag during a rehearsal for a flag-raising ceremony along the Bund in front of buildings in the Lujiazui Financial District at sunrise in Shanghai, China, on Tuesday, Jan. 4, 2022. A wall of maturing debt and a surge in seasonal demand for cash will test China’s financial markets this month, putting pressure on the central bank to ensure sufficient liquidity. Photographer: Qilai Shen/Bloomberg , Bloomberg

(Bloomberg) -- The relentless decline in China’s short-term rate swaps fueled by bets on persistently abundant liquidity may be about to end, according to Citigroup and Morgan Stanley strategists, who recommend clients to position for a flatter curve.

The difference between one- and three-year non-deliverable China interest-rate swaps expanded to 30 basis points Tuesday, the widest since 2017. Driven by low funding costs for banks during the pandemic, the spread is approaching the top of the range since China adopted the current monetary framework and started to set policy rates on a series of open-market tools as anchors in 2016, according to Citigroup.

“The room for further organic decline in interbank repo rates may be limited and risk of moving higher cannot be ignored,” the bank’s strategists Philip Yin and Gaurav Garg wrote this week in a note, citing a normalization of economic growth and interest rates. Meanwhile, increasing policy-loan maturities will allow the central bank to drain some liquidity from August, they said.

China’s seven-day repurchase rate, a gauge of borrowing costs among banks, has almost halved this year, and has moved further away from the PBOC’s seven-day reverse repo rate at 2.1%. That’s taken by market as a signal the financial system is awash with cash, while economic growth remains lackluster.

Assuming the PBOC won’t cut rates while the Federal Reserve raises them, the market is pricing in a fixing for seven-day repo rates at 1.7% for another six months, and then at 2.1% for a further six months, “which is a bit too much,” Morgan Stanley strategists including Min Dai wrote in a note.

Morgan Stanley therefore advises investors to exit long short-term rates and instead add a trade for the one- to five-year section of the yield curve to flatten. The current spread at 46 basis points may narrow by 20 basis points, according to the investment bank.

From a valuation perspective, chasing the longer-maturity rates might have a better risk-reward, the Morgan Stanley strategists said.