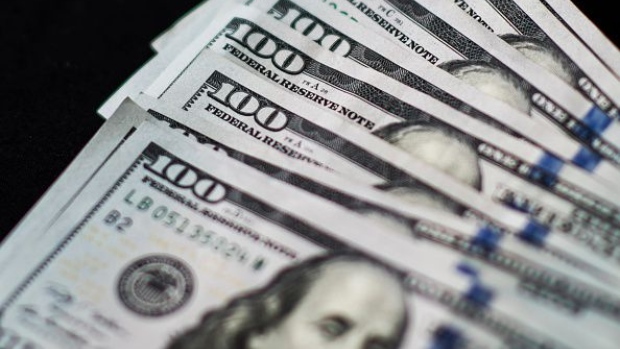 U.S. one-hundred dollar bills are arranged for a photograph in Hong Kong, China, on Monday, July 20, 2015. The yuan has proven to be among the more resilient emerging-market currencies this year, having fallen less than 0.1 percent versus the dollar as China cut interest rates and the U.S. prepared to raise. , Photographer: Bloomberg/Bloomberg

The dollar is likely to begin a drop of as much as 20 per cent in 2021 should COVID-19 vaccines become widely distributed and help to revive global trade and economic growth, according to Citigroup Inc.

“Vaccine distribution we believe will check off all of our bear market signposts, allowing the dollar to follow a similar path to that it experienced from the early to mid-2000s” when the currency started a multi-year downturn, Citigroup strategists including Calvin Tse wrote in a report Monday.

The Bloomberg dollar index, which has fallen about 11 per cent from its March peak, came under additional pressure Monday following news that Moderna Inc.’s COVID-19 vaccine was effective in a clinical trial, weighing on demand for havens like the greenback, the yen and Treasuries.

Strategists have been positing for months that the U.S. election, vaccine breakthroughs and Federal Reserve policy could deal a serious blow to the currency. The election wasn’t ultimately the catalyst for a significant plunge, but Citigroup says the broad macroeconomic backdrop will be a bigger driver of the dollar going forward. 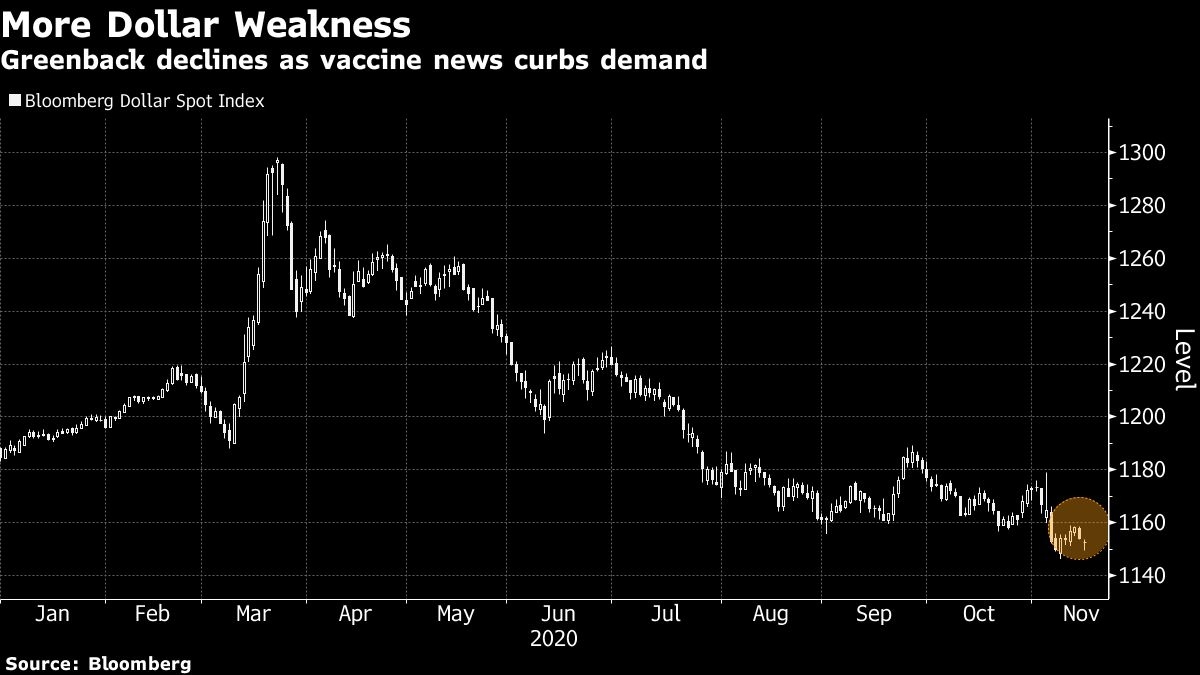 Investors should subsequently go long on the Australian dollar and the Norwegian krone as both are commodity-linked currencies that should benefit from a cyclical global recovery, Tse said in an interview. On top of that, Norway “has a relatively hawkish central bank compared to a sea of doves everywhere else, and the currency is very undervalued.”

Citigroup expects that in addition to the impact from vaccine breakthroughs, the dollar will suffer as the Fed will remain dovish as the global economy normalizes, the rest of the world is likely to grow at a faster pace and as investors rotate out of U.S. assets and into international assets.

And “should the U.S. yield curve steepen as inflation expectations rise, this will incentivize investors” to hedge currency exposure, the strategists said. “Given this setup, there is the potential for the dollar’s losses to be front-loaded,” with the currency spiraling lower sooner.

The consensus of forecasters surveyed by Bloomberg is that Intercontinental Exchange Inc.’s widely watched dollar index, the DXY, will weaken by about 3 per cent through the end of next year. Its biggest annual decline came in 1985, when it sank 18.5 per cent.

Citigroup notes that in 2001, the catalyst that kicked off the multi-year downtrend in the greenback was China’s joining of the World Trade Organization. That “spurred a wave of globalization, pushing global trade volumes higher, leaving behind the closed U.S. economy that had a much lower beta to global growth.”

“There is plenty of reason to be optimistic,” on vaccine developments, the strategists said. The distribution “will catalyze the next leg lower in the structural USD downtrend we expect.”