Gold prices may rally to a record above US$2,000 an ounce in the next two years, according to Citigroup Inc., which gave a laundry list of positive drivers including rising risks of a global recession and the likelihood that the Federal Reserve will reduce U.S. interest rates to zero.

“We expect spot gold prices to trade stronger for longer, possibly breaching US$2,000 an ounce and posting new cyclical highs at some point in the next year or two,” analysts including Aakash Doshi said in a note received Sept. 10. That would exceed the record of US$1,921.17 set in 2011. 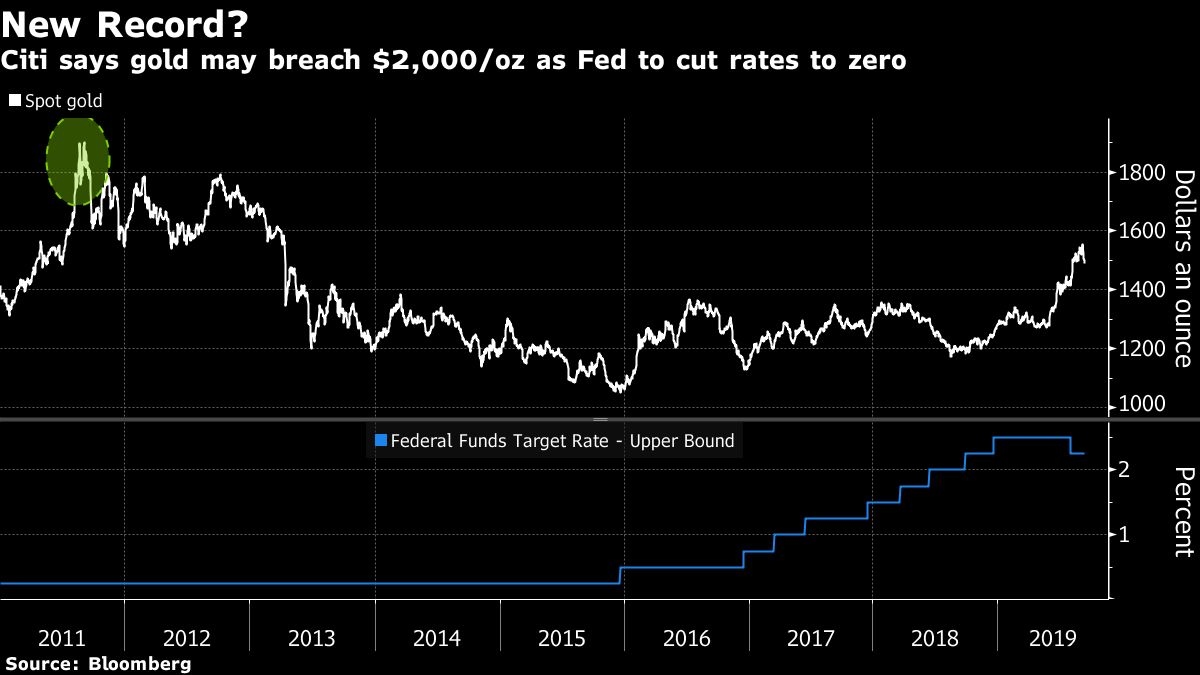 Low or lower-for-longer nominal and real interest rates; global recession risks -- exacerbated by U.S.-China trade tensions; and heightened geopolitical rifts are “combining to buttress a bullish gold market environment,” the bank said. Also, “in affinity to our U.S. rates research colleagues, we believe the Fed will ultimately end up cutting rates all the way to zero,” the analysts wrote.

Gold hit a six-year high this month as central banks ease policy to address the slowdown in growth amid the trade war. This week, investors expect the European Central Bank to unleash more stimulus, while next week the Fed is seen cutting rates again. That’s helped to drive flows into bullion-backed exchange-traded funds as investors track the trajectory of the U.S. economy.

“For now, the U.S. consumer and potential growth story is holding up,” Citi said in the note. However, “we remain more concerned about market signals -- three-month to 10-year yield curve inversion -- and leading indicators that are weakening at the fastest pace since the Great Recession,” it said.

In July, U.S. monetary policy makers reduced borrowing costs for the first time in more than a decade, and they are widely expected to do so again at their Sept. 17-18 meeting. BNP Paribas SA, which is also bullish on the outlook for bullion, said it expects four quarter-point reductions over the coming year.

Citi’s outlook did come with caveats, including a hawkish turn from the Fed or a breakthrough in trade talks, although that’s not its base case. “A surprise trade deal coupled with a sharp upturn in global manufacturing data would probably suggest a peak for gold at the US$1,550 an ounce level for this cycle.”\