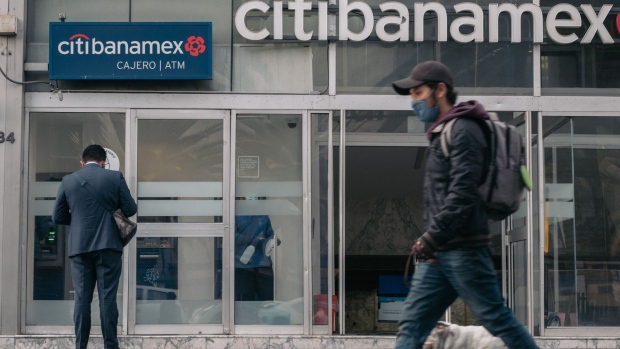 A Banco Nacional de Mexico SA (Banamex) Citibanamex bank branch in Mexico City, Mexico, on Wednesday, Jan. 12, 2022. Citigroup Inc. is planning to exit retail-banking operations in Mexico, where it has its largest branch network in the world, as part of Chief Executive Officer Jane Fraser’s continued push to overhaul the firm’s strategy. , Bloomberg

(Bloomberg) -- Citigroup Inc. expects to start the sales process for its consumer, small-business and middle-market banking units in Mexico in the spring.

The bank has already begun to separate those businesses from the institutional offerings it plans to keep, Chief Executive Officer Jane Fraser said on a conference call with analysts Friday. Citigroup, based in New York, intends to maintain a locally licensed bank in Mexico, she said.

“These are terrific, these are scaled, these are great franchises,” Fraser said. “This is a jewel for someone. It’s just not for us.”

Fraser said her firm expects Mexico to be a major recipient of global investment and trade flows in coming years. Taken together, the businesses Citigroup is seeking to exit generated $1.1 billion in net income last year and had about $20 billion in loans. The exit should free up about $4 billion in allocated tangible common equity, Citigroup said Friday in announcing fourth-quarter results.

Banco Santander SA is among firms exploring bids for Citigroup’s retail-banking operations in Mexico, which could also draw interest from Grupo Financiero Banorte SAB de CV and Bank of Nova Scotia, people with knowledge of the matter said this week. The decision to exit retail banking in the country came on the heels of Fraser’s move to end similar operations in 13 markets across Asia and Europe. Mexico will be the last market Citigroup opts to depart, Fraser said Friday.

“This particular exercise is drawing to a close in terms of what I would call the big step back as a new CEO,” said Fraser, who took the post last March. “This is the last major structural decision that we’re taking in Mexico, and we are now focused on pulling together everything.”