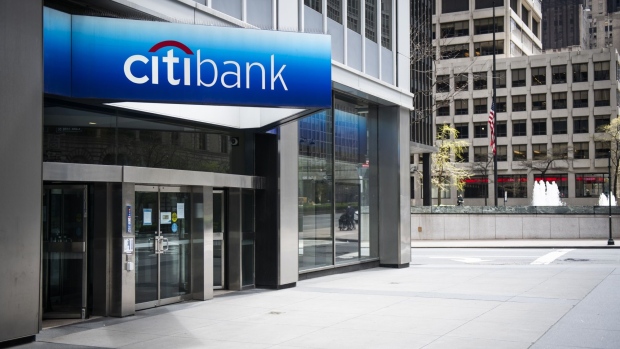 An empty sidewalk is seen in front of a Citigroup Inc. Citibank branch in New York, U.S., on Friday, April 10, 2020. Citigroup is scheduled to release earnings figures on April 15. Photographer: Mark Kauzlarich/Bloomberg , Bloomberg

(Bloomberg) -- Citigroup Inc. will resume job cuts starting this week, joining rivals such as Wells Fargo & Co. in ending an earlier pledge to pause staff reductions during the coronavirus pandemic.

The cuts will affect less than 1% of the bank’s global workforce, the bank said in a statement. With recent hiring, overall headcount probably won’t show any drops, the bank said.

“The decision to eliminate even a single colleague role is very difficult, especially during these challenging times,” Citigroup said in the statement. “We will do our best to support each person, including offering the ability to apply for open roles in other parts of the firm and providing severance packages.”

The bank said it has hired more than 26,000 people this year, and over one-third of those jobs were in the U.S.The lender had roughly 204,000 employees at the end of the second quarter.

Banks have resumed job cuts in recent weeks after pledging, en masse, to pause such actions earlier this year. Many firms are pushing to cut costs as the pandemic has dragged on, threatening lenders with higher credit costs and crimping revenue growth.

Citigroup Chief Financial Officer Mark Mason said on Monday the bank is hoping to keep expenses flat to slightly up this quarter as persistently low interest rates and a slowdown in consumer spending have weighed on revenue.

Mason said the bank has been investing more in improving its infrastructure and control functions after spending roughly $1 billion on such efforts this year. The bank’s main regulators, the Office of the Comptroller of the Currency and the Federal Reserve, are weighing whether to publicly reprimand the firm over continued deficiencies in those operations, people familiar with the matter said earlier on Monday.

The bank will offset those investments in better governance with plans to reduce its real estate footprint and by moving some employees to less-expensive cities and offices.