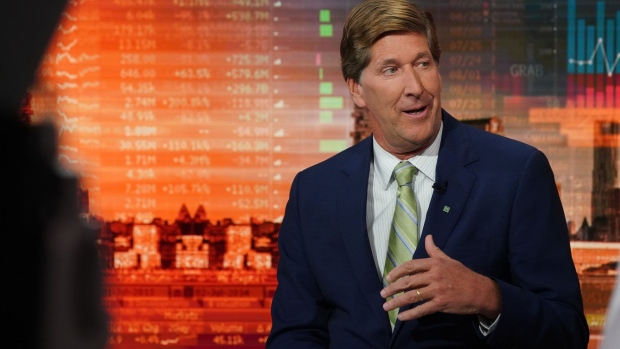 “People know that we have an interest in growing there, but that space is heavily sought after by players who can pay up, like PE firms,” Van Saun said in an interview Tuesday. “We’ve come close on a couple additional transactions, but we’re holding our discipline on what we’re willing to pay.”

Any acquisition in the wealth space would follow a string of deals by the nation’s fifth-largest regional bank by assets. So far this year, it’s bulked up in the New York City area with the purchase of 80 HSBC Holdings Plc bank branches. It also struck deals to buy Investors Bancorp for $3.5 billion in July and JMP Group LLC for $149 million earlier this month.

Banks more broadly are competing aggressively to serve the growing ranks of America’s wealthy. Citigroup Inc. is expanding wealth-management offerings around the globe and Deutsche Bank AG has added private bankers to cater to the rich.

That level of competition has prompted Citizens to be more direct. It’s contacting wealth firms that look like a good fit and attempting to negotiate with their principals directly as a way of avoiding a trudge through the bidding process, according to Van Saun.

Citizens’ recent dealmaking comes amid a broader wave of acquisitions among regional banks. All but one of the five largest such lenders by assets have inked deals for another bank sized somewhere in the billion-dollar range in the past few years. U.S. Bancorp announced on Tuesday that it had struck an $8 billion deal for MUFG Union Bank NA, expanding its presence in the West Coast.

That’s one region Van Saun views as essential due to the presence of the health-care and technology sectors.

“I think you have to be there,” he said, noting JMP’s presence on the West Coast offers “critical mass” in the region.