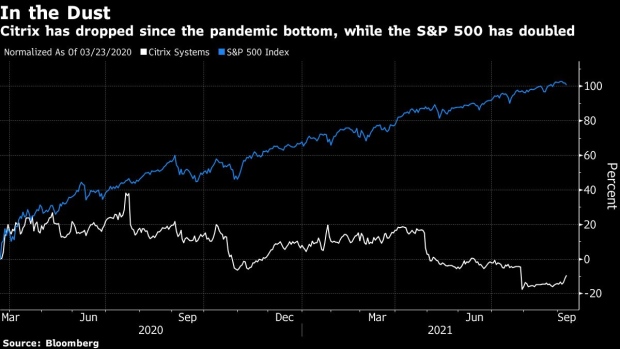 (Bloomberg) -- The biggest stock-market loser since the S&P 500 Index hit its pandemic bottom may not be who you expect. It isn’t an airline or restaurant operator. It’s workplace software maker Citrix Systems Inc., which was supposed to benefit from the lockdowns.

Now, activist investor Paul Singer has gotten involved. His Elliott Investment Management bought a stake of more than 10% in the company and is looking for management to reverse the decline. Citrix shares climbed 3% on Wednesday, the most since March, after Elliott’s ownership position was revealed.

The S&P 500 has doubled since it bottomed out on March 23, 2020. Citrix, on the other hand, has lost about 11%, making it the one of the few stocks in the benchmark that declined during the period.

Citrix’s lackluster performance shows that even though the pandemic has helped some businesses and industries, not all “lockdown stocks” are created equal. For example, e-commerce company Etsy Inc. and pool supplies distributor Pool Corp. have notched triple-digit gains since the S&P 500’s bottom. But video-game maker Take-Two Interactive Software Inc. is up just about 40% in that time, deeply underperforming the broader index, and is down in 2021.

A company representative for Citrix didn’t immediately respond to a request for comment.

For Citrix, the turnaround has been sharp. It was the best-performing stock in the S&P 500 in early 2020, soaring alongside shares of other technology companies that were benefiting from the new stay-at-home environment. In April 2020, the company said it had experienced a “surge in demand” in its fiscal first quarter that was driven by the pandemic, as it offered limited-use Citrix Workspace licenses during Corporate America’s transition to remote work.

Barclays analyst Raimo Lenschow raised his rating on the stock in July 2020 based on the expectation that the work-from-home tailwinds for companies such as Citrix would endure. But that’s changed. In an interview this week, Lenschow said that Citrix hasn’t been successful in converting consumers that turned to the company at the start of the pandemic into more permanent customers.

Citrix Chief Executive Officer David Henshall said in April that the company originally anticipated that customers with limited-use licenses would extend their contracts to more long-term commitments, but instead they rolled into another short-term offering. Revenue from Workspace, the company’s digital workspace software platform, was $581 million in the fiscal first quarter, down 11% year-over-year.

“In hindsight, it was a bad planning assumption on our part,” Henshall said during the company’s fiscal first-quarter earnings call, noting that the limited-use licenses were primarily for business continuity purposes.

That was followed by discouraging news in the most recent quarterly report released in late July, showing the company’s lack of progress in transitioning customers from its on-premises subscriptions to cloud-based offerings.

Citrix’s revenue for the fiscal second quarter trailed even the lowest analyst estimate, and its revenue and profit forecasts for the third quarter and fiscal year fell short of Wall Street projections. The revenue miss reflected “the challenge associated with transitioning the business to SaaS and the need to evolve our sales strategy to deliver more predictable results,” according to the company.

Barclays’ Lenschow downgraded the stock to underweight from overweight, saying the company’s shift to a “software-as-a-service” model was looking like “a longer and more complex transition.”

“That was the last straw in pushing investors to really bail on the name,” Morningstar analyst Dan Romanoff said in an interview. The firm trimmed its price target on the stock to $125 from $149 following results, which implies about 15% return potential from Thursday’s close of $108.30. Morningstar doesn’t formally rate stocks buy, sell or hold, he said.

Romanoff said that despite the challenges Citrix is facing, the stock has been trading below where he sees the company’s intrinsic value. Citrix still makes a product that solves a business problem for many consumers, he said.

He’s looking ahead to an analyst meeting Citrix has said will take place in October in conjunction with its fiscal third quarter earnings release. The company has promised to provide more details around its longer-term model at the meeting. Romanoff also expects that the involvement of Elliott, which also took a stake in Citrix in 2015 because of what it described at the time as execution issues and poor management, will be a focus of the event.

“I think Elliott Management becomes the story now until Citrix finds a way to change the narrative,” he said.