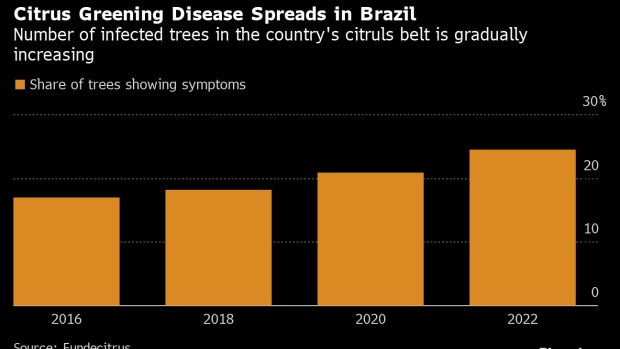 A worker inspects orange trees during a harvest in Avon Park, Florida, U.S., on Wednesday, March 2, 2022. Florida will produce the smallest crop of oranges in more than 75 years, reported the AP. , Bloomberg

(Bloomberg) -- The tree-killing disease that decimated Florida orange groves is intensifying across Brazil, the biggest juice producer in the world.

Citrus greening, a fatal illness that causes fruits to get smaller, fall off trees and produce bitter juice, is spreading across the nation that produces over 70% of the world’s orange juice. Nearly one in four orange trees in Brazil’s key orange-producing areas have the disease, according to research group Fundecitrus.

The thinning groves could worsen inflation at the breakfast table. In the US, juice retail prices rose on average 7.3% this year as the disease ravaged Florida’s crops. Prices are forecast to rise another 5.7% hike next year, said the Florida Department of Citrus, citing Nielsen data.

Florida’s decay has increased the world’s dependence on Brazilian crops. Output in the US’s top-producing state is set to be the smallest in almost eight decades due to a decades-long onslaught of citrus greening. Crop destruction following Hurricane Ian is seen reducing production even more. That leaves Brazil in a key position, with US demand for Brazilian juice already on the rise.

So far the damage to Brazil’s groves is not as extensive as Florida’s, where 80% of trees have been affected. Even so, Fundecitrus researcher Renato Bassanezi thinks growers in the South American country need to act fast. “An alarm is starting to sound.”

The disease’s spread across Brazil has accelerated since 2020 due to a lack of crop treatments and trees weakened by La Nina droughts. More trees are expected to get sick next year with the growing proliferation of the insect responsible for carrying the illness from one tree to another. The repercussions may be felt for years.

The planting of new trees to replace sick ones might not be enough to offset negative impacts, said consultant Mauricio Mendes, a partner at firm Agriplanning.

Young trees are being planted in areas already deeply affected by greening, which means that they might not be able to produce good fruits when they mature three years from now, Mendes said.

“The current season will probably be the best one we will have for several years.”