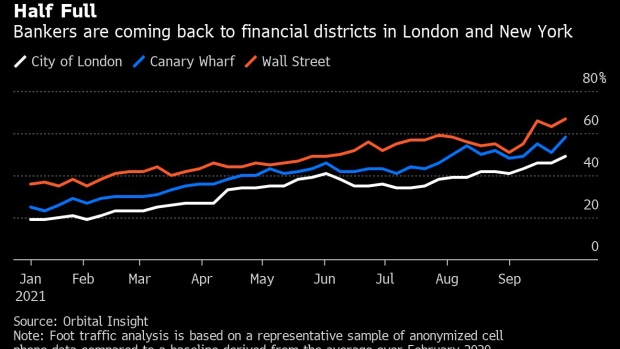 Commuters make their way over London Bridge towards the City of London, U.K., on Thursday, Sept. 30, 2021. Officials have flagged concerns about the labor market after the end of the government’s furlough plan, while households are also facing looming increases in their tax and energy bills that economists say could hurt confidence and reduce the opportunity for hikes. , Bloomberg

The City of London is now half full -- or half empty, depending on who’s counting -- as the capital gradually returns to the office after Covid-19 lockdowns.

Footfall on Oct. 13 in the Square Mile was at 51% of February 2020 levels, according to an analysis by Orbital Insight, which monitors activity through satellites and mobile phone data.

A few miles to the east, Canary Wharf is even busier, hitting 59% on Wednesday. Both are still emptier than Wall Street, where foot traffic is at around two-thirds of February 2020 levels, according to Orbital.

After a year and a half of remote working, it’s unclear how much fuller the city streets will get, particularly at the start and end of the week. Over September, average occupancy in offices across Europe and Africa was 14% on Mondays and just 11% on Fridays, well below the level seen on other weekdays, according to an analysis by workplace optimization firm Freespace, which has more than 100,000 sensors in offices across the world.

The data suggests that -- while city centers are far from dead -- those bank chiefs and politicians hoping for fully revived offices may struggle to get their wish with employees reluctant to give up the perks of home work entirely. Some 52% of Britons say they’d rather quit than go back to the office full time, according to a nationally representative survey of 2,005 adults conducted in mid-September by survey software company Momentive.

“An outstanding office has advantages that even a great home working environment can’t compete with, and employees and employers alike will realize this as hybrid working becomes more entrenched,” said Allison English, deputy chief executive officer of workplace research firm Leesman. “The future of work isn’t about home, office, or hybrid – it’s about agility.”