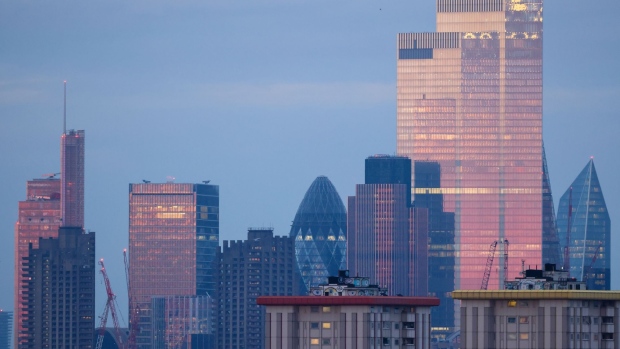 A view of 30 St. Marys Axe, also known as The Gherkin, on the City of London, U.K., on Wednesday, May 26, 2021. A supermoon is when a full moon occurs at the closest point to Earth during its orbit, making it appear larger and brighter. Photographer: Hollie Adams/Bloomberg , Bloomberg

The City of London has turned down an application for a new skyscraper that would have overshadowed Britain’s oldest synagogue, a rare rejection of a tower development in the ever expanding financial district.

The Planning and Transportation Committee on Tuesday refused permission for Welput, a fund managed by private equity firm BentallGreenOak, to redevelop a 1960s office building on Bury Street in the financial district. The proposed 48-storey tower would have neighbored the iconic Gherkin tower while also looming over the 18th century Bevis Marks synagogue.

Most City tower proposals in recent years have been given the go-ahead, resulting in a dramatically changing skyline over the past two decades. More than a dozen new skyscrapers are currently being planned in the district, which has few residents, as developers shrug off fears about the post-Covid demise of the office. Earlier this year, three new towers were approved within the space of a month.

The Bury Street project faced some of the fiercest objection to a City development in recent years, with critics saying the tower would block much of the synagogue’s sun. While its interior chandeliers offer some illumination, the architects of the 1701 building assumed plentiful natural light to give the space character. The synagogue was the first built after Jews were allowed back into England by Oliver Cromwell, following their banishment by Edward I in 1290.

“There are so many ways that Bevis Marks will be harmed by this scheme,” Rabbi Shalom Morris from Bevis Marks said during the meeting on Tuesday. “I’m almost in disbelief we’re having this meeting.”

Welput now has the option to appeal the decision, or revise its plans. Even if the tower is approved on appeal it could be subject to further scrutiny by the mayor of London and central government.

Historic England had also raised concerns about the Bury House development, arguing it could affect views from the Tower of London and the light quality in nearby Leadenhall Market.