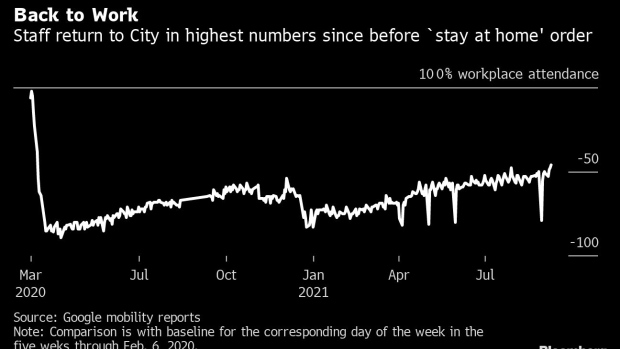 Morning commuters cross London Bridge towards the City of London, U.K., on Monday, Sept. 13, 2021. The ending of the government's furlough scheme in September will be key to the outlook for jobs and interest rates. , Bloomberg

(Bloomberg) -- More people are back at their desks in the City of London than at any time since the pandemic forced the government to impose a lockdown 18 month ago.

In the financial district, more than half of staff were back in their offices on Thursday, according to data compiled by Google, which tracks the locations of its users.

The number of people returning has gradually ticked up in recent months, but the start of the school term is now accelerating the process. Many employers are pushing staff to come into work for at least a few days a week.

Their return has boosted the local economy, with bars and restaurants last week appearing to be the busiest they’ve been since the pandemic struck. Traffic congestion and public transportation usage has also increased markedly.

London’s biggest financial district emptied out in March of last year as Covid-19 spread. Most of the Square Mile’s 540,000 workers were required to work from home.

The number of workers returning to the City of London still lags other areas, the data show. Employees entering offices in major U.K. cities rose last week to 90% of pre-Covid levels from 58% a week earlier, according to figures from Metrikus, which installs sensors in office buildings to measure occupancy rates.