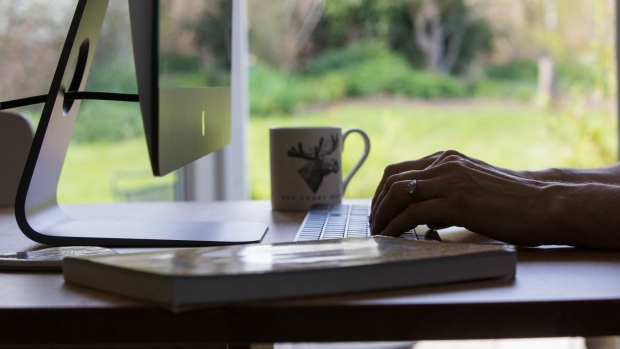 (Bloomberg) -- Some City of London workers are starting to take matters into their own hands as they look to reduce the risk of catching coronavirus ahead of the holiday season.

Firms including Invesco and PwC have seen an increase in staff working from home recently, as employees take advantage of the flexibility afforded by remote working policies instituted since the pandemic. The caution comes as the U.K. government resists tightening its work-from-home guidance as it continues to assess the omicron variant.

“People self-adjust to moderate their own risk exposure,” Lord Mayor of London Vincent Keaveny, an ambassador for the City, said in an interview Monday. “One of the things that people are very concerned about is to protect their family Christmases and people are adopting a slightly more considered and perhaps slightly more conservative approach.”

Employers are boosting precautionary measures even as they defer to the unchanged government advice. At BNP Paribas SA’s real estate arm, socially-distanced desks have made a return and internal Christmas celebrations can now be postponed to 2022 “to avoid the risk of festive team events causing any unnecessary disruption to personal plans over the holiday period,” according to a spokesperson.

While firms are adopting increasingly cautious messaging, few have gone so far as to formally ask their staff to work from home. Spokespeople for hedge fund Man Group Plc, asset manager Schroders Plc and professional services firm PwC said they continue to follow government guidelines and monitor the situation closely. And flexible working means adjustments can happen without top-down guidance.

PwC’s flexible hybrid policy means “people can spend more time at home in the near term if they prefer,” a spokeswoman said, noting attendance has recently plateaued after rising the past few months. Those still coming into the offices are advised to take lateral flow tests and wear masks in the lifts.

The retreat to kitchen tables and spare rooms comes as omicron takes hold in the U.K., with cases doubling every three days, according to government scientific advisers. Epidemiologists have warned omicron could supplant delta as the dominant variant within weeks.

While omicron is spreading faster, it’s not clear whether it’s as lethal as previous variants of the variants. Some physicians in South Africa have described cases as mostly mild, though public health experts say reports of early cases need to be interpreted with caution because many occurred in young people with no significant risk factors and may not reflect the reaction across a broad range of people.

While a slew of Christmas gatherings have been postponed or canceled and latte sales are lagging, attendance levels at investment banks like Goldman Sachs Group Inc. are little changed, according to people familiar with the matter. Last week, more people were back in the City of London than at any time since the government imposed a lockdown in March last year, according to data compiled by Google. That supports the idea that any drop in attendance might be temporary.

The current pullback from offices is likely to be temporary, Keaveny said. “I think the actual direction of travel remains very much lets get back to the office, lets get back to in-person gatherings.”