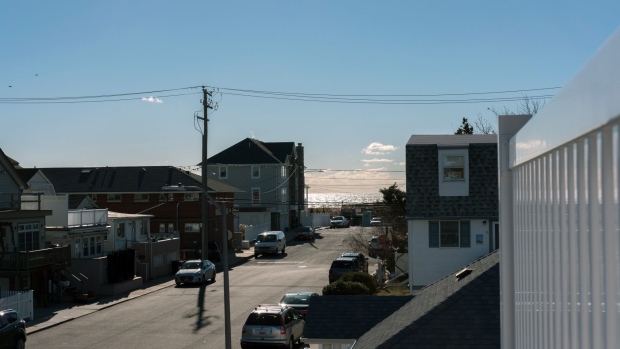 Homes stand near the water in Long Beach, New York, U.S., on Tuesday, Dec. 18, 2018. As climate change makes flooding and hurricanes more severe, federal regulations are forcing cities and towns to raise homes, businesses and public buildings above the expected height of future storms—in some places by as much as 15 or 20 feet. But that vision of resilience is forcing painful questions about whether and how the disabled can remain part of those communities. , Bloomberg

(Bloomberg) -- Long Beach, New York, a city of about 34,000 on Long Island’s south shore, is considering restructuring obligations that could surpass $460 million as it faces a court judgment that exceeds its annual revenue.

The community, about 25 miles (40 kilometers) east of New York City, last week hired M3 Partners, LP to help it develop a restructuring plan and O’Melveny & Myers LLP for legal advice, according to city meeting minutes. In January, a Nassau County judge awarded about $130 million to a developer who had sued the city in 1989 over the revocation of permits to build condominium towers.

The court judgment, which is more than Long Beach’s roughly $85 million in annual revenue, capped years of financial mismanagement by the city, including borrowing to pay operating costs, according to the state Comptroller’s Office. Long Beach, which was walloped by Superstorm Sandy in 2012, has also been plagued by management turnover.

“We’ve got to do something to get things back in line,” said Long Beach City Manager Donna Gayden, adding that the city is appealing the judgment. “We’re making sure we’ve recorded all the long-term liabilities, that there’s nothing else sitting out there and doing the first part of the work.”

Long Beach had about $120 million in bond debt and $140 million in retiree health-benefit liabilities as of its most recent financial statement. The city, where actor Billy Crystal grew up, also owes about $30 million for compensated absences like sick leave and vacation pay and another $40 million in liabilities for pensions, employee separation agreements and other claims. Long Beach doesn’t have an immediate need to file bankruptcy, according to people familiar with the matter who asked not to be identified because the deliberations over the municipality’s finances were private.

In prior cases of municipal distress, including New York City, Nassau County, Buffalo and the city of Troy, the state Legislature has created financial control boards to restructure debt and oversee finances. Long Beach has applied to the state’s Financial Restructuring Board for assistance, Gayden said.

On Monday, a dealer purchased $1.37 million of Long Beach general-obligation bonds maturing in 2026 at a yield of 1.1%, or 0.7 percentage point more than top-rated bonds with the same maturity, according to data compiled by Bloomberg. A customer purchased the same bonds on Sept. 14 at a 1.79% yield, or 1.41 percentage point more than top-rated debt. Spreads across the municipal market have narrowed in recent months with a wall of cash looking for tax-exempt securities.

Long Beach adopted budgets that resulted in operating deficits totaling $8.5 million between 2014 and 2018, the Comptroller’s Division of Local Government and School Accountability wrote in a 2019 report. In response, the city drained its reserves and issued debt for operations, including the payment of severance packages. At least three of the five council members didn’t know the city had five straight years of operating deficits, according to the report.

Long Beach has borrowed as much $3 million annually for separation pay, said Gayden, who was hired in February 2020 to develop a budget that eliminated the borrowing.

“The rapid decline in fund balance resulted from poor budgeting practices by city officials, including unrealistic estimates of revenues, the use of non-recurring funding sources in the general fund and the lack of long-term financial planning,” the report said.

The state Comptroller’s office ranks Long Beach the most fiscally stressed municipality in the state.

Moody’s Investors Service rates Long Beach’s debt Baa2, the second-lowest investment grade. The size of the court judgment was a “particular surprise,” the rating company said in January. When the city borrowed about $40 million in August 2020, offering documents estimated the judgment would cost $55 million.

Borrowing to pay the judgment would increase the city’s fixed costs by more than a third assuming amortization over 15 years, Moody’s said. In fiscal 2019, the city’s debt service, pension and retiree health-care contributions totaled $23 million, accounting for 28% of operating revenue, the rating company said.

David Jacobson, a Moody’s spokesman, declined to comment on the city’s hiring of restructuring advisers.

On Monday, Long Beach said it created a website called “DebtDash” that will give residents real-time information about the city’s fiscal health. The page will include audits, budgets and status reports, according to a news release.