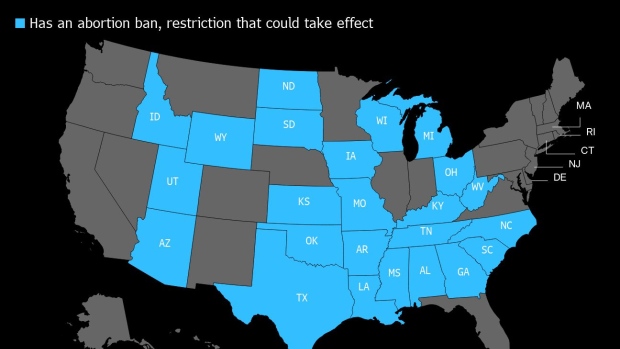 (Bloomberg) -- The stark divides and murky legalities of how US states handle abortion rights may be most intense at the northwest corner of the country.

Less than two months before a leaked Supreme Court document signaled the imminent demise of Roe v. Wade, the governors of Washington and Idaho signed diametrically opposite abortion bills. Washington aimed to boost access and shore up protections for providers. Next door, Idaho banned the procedure after a fetal heartbeat is detected and said it would allow individuals to sue providers they believe violated the law.

Now, Washington is preparing for a flood of Idahoans seeking care — a move that could overwhelm clinics and possibly expose providers to legal liability from its neighboring state.

It’s a scenario set to play out across the country as the nationwide standard from Roe unravels to an array of laws that vary greatly across state lines. The strict abortions limits likely to be imposed in conservative areas  — from bans to a Missouri proposal to criminalize out-of-state travel for the procedure — set the stage for interstate clashes and threaten to sow confusion for women seeking care.

Liberal states such as California and New York are setting themselves up to be abortion havens. Illinois is set to be the lone abortion refuge in the Midwest. Washington, meanwhile, is facing a fight right at its border.

The diverging laws raise many questions about seeking care in another state or aiding in out-of-state abortions, and there are “no very clear answers,” according to Kalantry. For instance, she said, what happens if an Idaho resident sues a Washington provider for abortion care given to an Idahoan in that state?  Could a Planned Parenthood in Idaho be liable for actions of a Planned Parenthood in Washington? What if a Washington clinic prescribes abortion pills to an Idaho resident and the pregnancy is terminated in Idaho? Those types of uncertainties could have a chilling effect on providers and abortion seekers.

Washington is set to bear the brunt of Idaho abortion demand. Oregon, the other blue state on the border, has no clinics performing the procedure on its eastern side, with the closest one in the more central city of Bend. US citizens can travel to Canada to obtain abortions but the border is almost 500 miles (805 kilometers) from Idaho’s main population centers in the Boise area. If half the country loses access to abortion care — a likely outcome if Roe is overturned — Washington state health centers would see a 385% increase in patients seeking access from out of state, according to the Guttmacher Institute, a nonpartisan think tank that studies abortion access.

“That number is staggering,” said Paul Dillon, the Spokane-based vice president of public affairs for Planned Parenthood of Greater Washington and North Idaho. “We have been preparing for this moment. It just got more real once we discovered the leak and it confirmed our deepest fears.”

The burden is likely to fall hardest on Planned Parenthood clinics in Pullman, less than 8 miles from the Idaho border, and Spokane Valley, about 11 miles away. Both have faced violence from anti-abortion forces in the past decade — the Pullman clinic was firebombed in 2015. There are only a handful of clinics in eastern Washington, compared with more than two dozen on the west side of the state.

Democratic Governor Jay Inslee signed the Affirm Washington Abortion Access Act on March 17, just six days before Idaho Governor Brad Little put his pen to the more restrictive measure. The Washington law makes clear that nurse practitioners and physicians assistants can provide reproductive care and that the government won’t take action against anyone who legally performs the procedure in the state, where abortion has been legal since 1970.

Idaho enacted several restrictions on abortions in first decade of the 2000s and last year passed the fetal heartbeat law that would ban abortions after around six weeks of pregnancy — before a similar controversial measure in Texas. Boise legislators attached a so-called trigger mechanism saying the law wouldn’t take effect until an appellate court upheld a similar law elsewhere.

The 2022 law added the citizen enforcement. Unlike the Texas statute, which opens the door to lawsuits against anyone who “aids and abets” an abortion, Idaho targets only providers. Little, a Republican, has said he has concerns about that aspect of the law, which has been paused by the state supreme court, pending the outcome of a legal challenge by Planned Parenthood.

Barbara Ehardt, a Republican in Idaho’s House of Representatives and co-sponsor of the measure, said the proposal was “part of a bigger plan, my hope that” Roe would be struck down this year. But she acknowledged that Idaho can’t control what happens in surrounding areas.“It’s never been, at least it’s not supposed to be, that one state’s law can be written for another state,” she said. “If that be the case, there would be no sovereignty of states. We’d be the Soviet Union.”Washington’s attorney general, Bob Ferguson, told a pro-choice rally in Seattle on May 3 that his office is preparing for the possibility it might have to defend Washington residents who aid in out-of-state abortions or those who receive care there.

“I can assure you in no uncertain terms that my office will do everything in our power to  protect this fundamental right and to protect the rights of anyone who wants to come here to Washington State to access reproductive health care,” Ferguson said.

Civil suits in Idaho against out-of-state residents are unlikely to succeed, according to Idaho Attorney General Lawrence Wasden, who wrote in an analysis of his state’s bill that “the state law where the abortion was performed would likely be the controlling law.”

But because Idaho’s law, like the Texas one, is enforced by citizen action, not the attorney general, it opens the door to civil lawsuits that may create fear among those seeking or providing abortion care.

“It will have the scare effect — people don't want to be the example that has to fight a case all the way to the high court to have a law declared invalid,” said Seattle University’s Kalantry.Washington clinics are already seeing an influx of out-of-state patients, according to Dillon of Planned Parenthood. Earlier this year, the group’s clinic in Yakima provided a surgical abortion to a patient from Texas.

My-Linh Thai, the Washington state representative who introduced the new abortion law, said she also worked with other legislators to put additional funding in the state budget to support clinics and increase the rates providers are paid. She’s glad her bill, which takes effect in June, can help.“I am very happy that because of that law we now have more accessibility to all those that seek care from across the border,” she said.Still, attendees of protests in Washington this month expressed horror that women might be forced again to seek out-of-state care. Sylvia Wong, a 20-year-old from Shoreline, attended a gathering at the University of Washington, noting that her grandmother had an illegal abortion in the 1960s  “that she had to cross state lines and risk her life for” she said. “We have to never go back.”