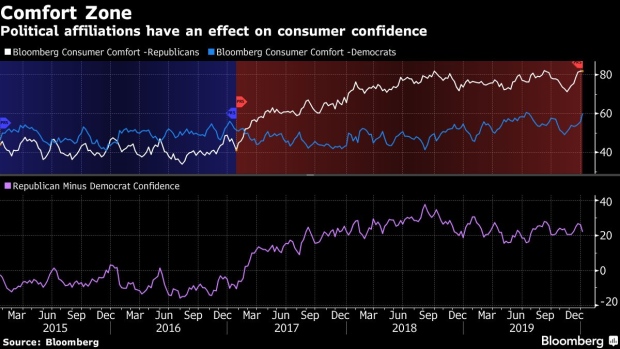 (Bloomberg) -- Ever find yourself nodding along as a colleague delivers their latest political rant? For fund managers, that could be a problem.

Portfolio management teams with similar political views trail those with different ideologies by 0.4% in benchmark-adjusted returns per year, according to new academic research based on U.S. political contributions data. Diversity is also linked to greater deviations from the benchmark, suggesting stock pickers in disagreement may be better at using disparate information and keeping one another in check.

The conclusions serve as a timely warning in an election year when anything from Democratic candidates’ policy proposals and presidential tweets to impeachment headlines are jolting stocks and permeating market commentaries.

The authors -- from the University of Virginia, Nova School of Business and Economics and University of Notre Dame -- looked at how the political diversity of around 2,500 money managers working in teams affected their fund performance from 1992 to 2016. After stripping out dispersion in factors such as gender, ethnicity and experience, they found it’s not about the individual. A partisan fund manager on a few teams at the same time does better in a heterogeneous one than with kindred spirits.

It’s a well-documented fact that politics can sway asset allocation. Another 2019 academic paper argues that fund managers are more likely to invest in firms managed by like-minded executives at the expense of clients.

Anecdotally, predictions that a politician will kill or buoy markets have reaped few tangible returns, with history showing similar stock performance under Democrats and Republicans.

The academics point to one example of how varying perspectives might shape portfolios: those with Democratic sympathies hold more stocks with high environmental, social and governance scores, while Republicans have a taste for so-called sin stocks. Diverse teams temper those impulses.

Or consider this: Such teams are more likely to use fund inflows to add new positions, a move that previous studies have suggested should be better for performance than simply enlarging existing ones.

But the December paper also posits that at times of high political polarization, the superior performance of diverse teams fades. Based on the index used in the paper compiled by the Federal Reserve Bank of Philadelphia, partisanship has climbed over the past decade, but has subsided from a record high reached in early 2017.

“We are also mindful that greater differences between team members may negatively affect performance if a conflict arises,” according to the study.

If political diversity is still mostly beneficial for returns, why isn’t it more common within asset-management teams?

Unsurprisingly, people don’t like working with those they disagree with, and the more entrenched a fund manager is -- as proxied by their tenure and how much they manage -- the more homogeneous their team is. Geography is another factor. Investment advisers in less ideologically diverse states are more likely to have teams with similar views.

To contact the editors responsible for this story: Sam Potter at spotter33@bloomberg.net, Cecile Gutscher, Sid Verma