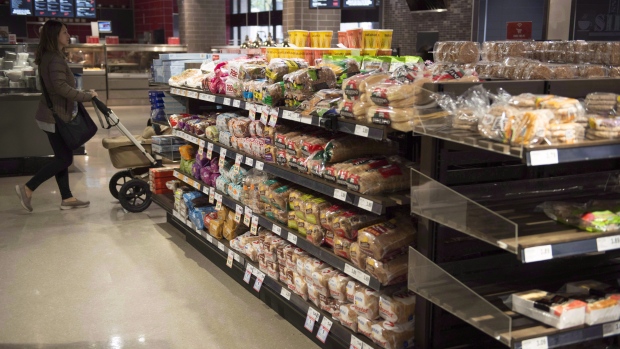 Various brands of bread sit on shelves in a grocery store in Toronto on Wednesday Nov. 1, 2017. The Competition Bureau's investigation into allegations of bread price fixing includes at least seven companies including Loblaw and Weston Bakeries, according to court documents. , The Canadian Press/Doug Ives

MONTREAL -- Karim Renno says his recently authorized class action lawsuit against major food retailers and producers accused of fixing the price of bread across Canada is special, because a key player has already admitted to it.

Price-fixing is notoriously difficult to prove in court, the lawyer said in an interview Friday, but in this case, Loblaw Companies and Canada's Competition Bureau have done a lot of the work.

"What's extraordinary here is not just the investigation by the Competition Bureau," Renno said, but we also have affidavits and the evidence. We have specific information from (Loblaw), who said 'this is how it worked.' "

On Thursday, Quebec Superior Court Justice Pierre Gagnon authorized a class action lawsuit against a group of food retailers and bread producers, for allegedly having colluded together to fix the price of bread across Canada since 2001.

The lawsuit involves any person, association or partnership residing in Quebec, who bought packaged bread from the defendants, between Jan. 1, 2001 and Dec. 19, 2019 -- the date the suit was authorized in court.

Marie-Claude Bacon, spokeswoman for Metro, said in an email, the company "does not believe that it, or any of its employees, have contravened the Competition Act.

"The authorization judgment is a purely procedural step that does not decide the merits of the case. The company intends to contest this class action on the substantive since it believes it is unfounded."

Giant Tiger said it has no reason to believe the company or any employees violated the Competition Act.

"We have and will continue to co-operate fully with the Competition Bureau and look forward to seeing the results of the complete investigation," said Alison Scarlett, director of brand communications in an email.

Jason Patuano, director of communications for Sobeys, said the company sees "no evidence" of any Sobeys involvement. "We reiterate, yet again, that we have seen absolutely no indication that Sobeys contravened competition law," he wrote in an email.

Attempts to reach the other defendants for comment were unsuccessful.

The lawsuit, and the green light given to it earlier in the week, were widely expected because Loblaw had come forward in 2015 to the Competition Bureau and admitted to taking part in the scheme. The company also named its alleged accomplices, who are listed as defendants in the case, Renno said.

In 2017, George Weston Ltd. and Loblaw released a statement saying: "The arrangement involved the co-ordination of retail and wholesale prices of certain packaged bread products over a period extending from late 2001 to March 2015. Under the arrangement, the participants regularly increased prices on a co-ordinated basis."

According to federal law, companies that admit wrongdoing and co-operate with the Competition Bureau are granted immunity from criminal charges or penalties -- but they are still liable in civil court.

Renno said evidence from the Competition Bureau's investigation includes email exchanges and testimony from some of the defendants that demonstrate a co-ordinated plan to raise the price of bread by seven to 10 cents a year.

"We see this in the emails," Renno said. "We also read how some of (the defendants) complained about another one who wasn't respecting the deal. They said: 'I saw the flyer of this store, what's the story here? How are they not respecting what we agreed to?' "

The Canadian Press has not been able to verify or review the Competition Bureau's evidence. Marcus Callaghan, spokesman the bureau, said in an email it is "investigating alleged anti-competitive agreements between competitors -- including Canada Bread, Weston Bakeries, Loblaw, Walmart, Sobeys, Metro, and Giant Tiger -- to fix the wholesale and retail price of fresh commercial bread in Canada.

"The investigation is ongoing. There is no conclusion of wrongdoing at this time, and no charges have been laid."

Renno said the alleged price-fixing scheme occurred across the country but his lawsuit is only open to Quebec residents, companies or associations. He said he believes the damages are in the billions of dollars.

Loblaw and George Weston have stated that they discovered the wrongdoing in 2015 and that the employees responsible are no longer employed by them.