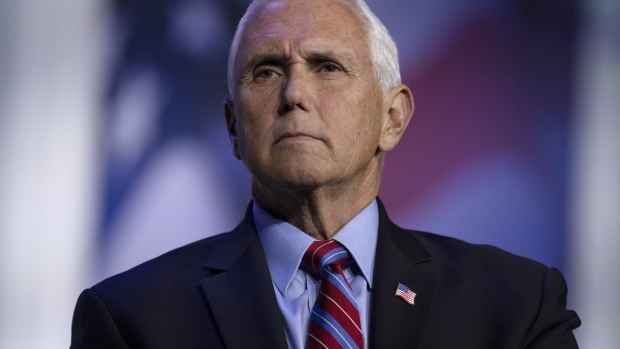 (Bloomberg) -- Former Vice President Mike Pence had “a small number” of documents marked as classified at his Indiana home that were turned over to the FBI following a recent search, according to his attorney’s letters to the National Archives.

Pence is the latest high-level official to find himself entangled with the Justice Department over the discovery of classified information — sensitive material that is supposed to be monitored and kept in secure storage — in his private possession.

Pence’s lawyer Greg Jacob told the National Archives about the document discovery in a Jan. 18 letter, saying that the materials were “inadvertently boxed” and sent to Pence’s home after he left office in January 2021. The letters were provided to Bloomberg by a Pence spokesman.

According to Jacob, Pence had brought in a lawyer to search his home on Jan. 16 “out of an abundance of caution” following recent reports about the discovery of classified material at Biden’s home in Delaware.

In a second letter to the National Archives dated Jan. 22, Jacob explained that on Jan. 19, the Justice Department asked to retrieve the documents, and that Pence — who was in Washington for the anti-abortion March for Life event — agreed.

FBI agents came to his home that evening to get the records, which were being kept in a safe. Jacob wrote that they also arranged for the National Archives to take the two boxes in which the classified information was found, as well as any other boxes containing “courtesy copies” of vice presidential papers so all administration records were turned over.

CNN earlier reported the discover of documents at Pence’s home on Tuesday. A Pence spokesperson declined to comment further. A Justice Department spokesperson did not immediately return a request for comment.

Trump weighed in about the finding at Pence’s home on Truth Social, writing “Mike Pence is an innocent man. He never did anything knowingly dishonest in his life. Leave him alone!!!”

Pence told the Associated Press in an interview last August that he didn’t take any classified information when he left office to his knowledge. He also has been critical of what he’s called a “double standard” in how the Justice Department has handled the discovery of classified documents from Biden and Trump.

“The Biden papers should be dealt with precisely the same way that President Trump’s papers have been dealt with and examined with the same thoroughness and carefulness,” Pence said in a Jan. 11 interview with CBS.

--With assistance from Chris Strohm.