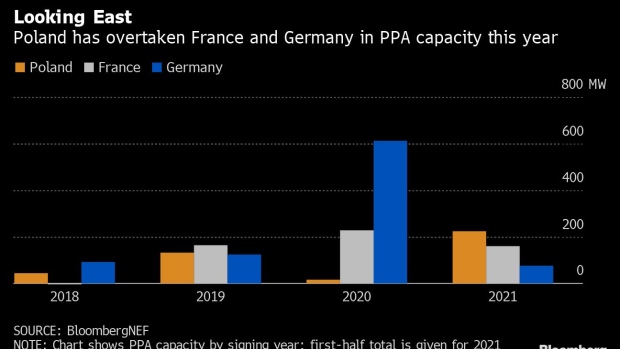 (Bloomberg) -- European companies chasing zero-emission targets are starting to turn to an unexpected part of the continent to bolster their clean-power supplies.

Renewable developers in eastern European countries such as Poland, the EU’s most coal-dependent economy, are selling power direct to the local units of companies from the west. That approach, spurred by meager state subsidies for clean energy, is finding willing buyers as coal, gas and carbon prices soar, making the wind and solar output competitive with electricity from the grid.

Such power-purchase agreements “will rapidly grow in eastern European countries such as Poland, Hungary and Romania because national support mechanisms aren’t sufficient,” said Damien Ricordeau, head of Finergreen SAS, which arranges such contracts. “Now that prices have reached grid parity, private companies and utilities will replace governments to fund renewables.”

This month Belgium’s Umicore SA, a maker of battery materials, agreed to buy power from an Engie SA wind farm in Poland for a cathode plant it’s building in the country. French telecommunications group Orange SA also signed a so-called PPA for Polish wind power with Germany’s Wpd AG last year, and is seeking more such deals in the region.

“We’re looking at other eastern European countries whose economies are very carbon-intensive,” Matthieu Belloir, director of corporate social responsibility at Orange, said in an interview. “It’s a way for us to hedge against shifts in power prices” while moving toward Orange’s net-zero emission target in 2040.

Clean-power PPAs first took off in the U.S., then spread to Europe’s windiest and sunniest countries. In the latest shift, PPAs in Poland are outpacing similar transactions in Germany and France, where wind and solar developers can still bid for attractive government subsidies that will guarantee a certain price on the market, according to researcher BloombergNEF.

Total PPAs in Germany were boosted last year by a large deal with Amazon.com Inc., but have dropped off in 2021. In France, obstacles to such agreements include “strong regulation in land use, which creates some challenges to growing renewable energies, including corporate PPAs,” said Julien Pouget, head of renewables at TotalEnergies SE.

In Poland, meanwhile, PPAs are booming. The rising price of coal, which accounts for the majority of Polish power generation, has pushed the nation’s electricity costs to among the highest in Europe. That’s prompting corporate consumers to seek out fixed-price, long-term clean-energy deals that protect them from market volatility while helping them meet climate targets.

One such deal, a 10-year contract, was agreed by cement maker HeidelbergCement AG’s Polish subsidiary in January, allowing it to buy electricity from the country’s biggest solar farm, being built by BayWa AG.

“Here is the ultimate proof that photovoltaic power can –- without any subsidies -- be competitive to conventional energies,” Benedikt Ortmann, global director of solar projects at BayWa’s renewables unit, said at the time. That’s the case “even in a European country further north, which still generates 80% of its electricity from coal.”