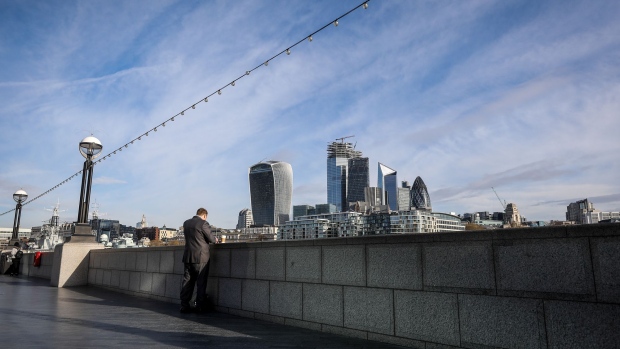 Skyscrapers, including 20 Fenchurch Street, also known as the "Walkie-Talkie," 22 Bishopsgate office tower, the Leadenhall building, also known as the "Cheesegrater", The Scalpel and 30 St Mary Axe, also known as "the Gherkin" stand in the City of London's Financial district in this view from the Southbank of the River Thames in London, U.K., on Friday, April 5, 2019. Job vacancies in London’s finance industry have halved in two years as uncertainty over Brexit knocks business confidence, a survey by recruiter Morgan McKinley has found. Photographer: Simon Dawson/Bloomberg , Photographer: Simon Dawson/Bloomberg

(Bloomberg) -- Global clearing houses are considering whether to shift trillions of dollars of interest-rate derivatives away from the London interbank offered rate before the benchmark expires.

LCH Ltd. is consulting clients about an exit strategy that would protect swaps from tight liquidity before the possible retirement of multiple Libor benchmarks at year-end, according to Phil Whitehurst, head of service development, rates at SwapClear, which is part of the firm. CME Group Inc. opened a similar consultation on Thursday.

The proposals could address limited progress away from Libor in the derivatives industry, which is especially pronounced in the U.S.

LCH could carry out a switchover in late November or early December for some Libors, Whitehurst said in an interview this week.

Clearing houses are now planning a full transition away from Libor, which has been undermined by manipulation scandals and a shortage of trading data to inform the rate.

The proposal echoes the so-called big bang in October, when clearing houses successfully switched swaps to the secured overnight financing rate, the main U.S. Libor replacement, for the purpose of determining their value. The reset saw SOFR replace the effective federal funds rate and was part of a push to make it a standard U.S. reference rate in debt and derivatives markets.

“It’s an event we would be using to sweep up the population of outstanding Libor trades,” LCH’s Whitehurst said in an interview. “We know Libor cessation is a challenge for everyone. We’ve had some big events already such as the discounting switches. They do involve work for all involved but we think they represent the best possible outcomes.”

The clearing houses propose overseeing a compensation system, where they distribute cash from clients whose portfolios benefit from changes to those who lose out.

A CME spokesman said the main benefit would be that in the event Libor ends, “participants would not be left holding an instrument or exposure in a market that is less liquid.”