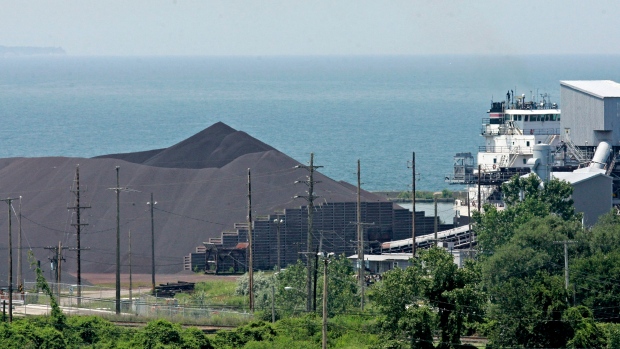 A mountain of taconite ore is piled at the ore dock on the Lake Erie shoreline in Cleveland Wednesday, July 16, 2008. , The Canadian Press

As shares of the largest U.S. iron ore producer fell as much as 10 per cent Friday, Goncalves closed his analyst call by specifically calling out Goldman’s Matthew Korn. The CEO questioned Korn for saying in a report Friday that the company “modestly missed estimates.”

“ Matthew Korn from Goldman Sachs, you can run, but you can’t hide,” he said. “I will see you at the Goldman Sachs conference, very soon. And bring your commodity desk guy, because you owe me that for last year.”

It was the end of a call in which Goncalves raged against analysts that he said don’t understand his company and short-sellers who are betting against it. There is a long checkered history of company leaders attacking critics on conference calls, perhaps most famously when Enron Corp. CEO Jeff Skilling in 2001 used an epithet to refer to a fund manager who questioned the balance sheet.

Goncalves’s statements come after Tesla Inc. CEO Elon Musk pledged to “ burn” short-sellers after an analyst call in May. An analyst on the call asked if Goncalves would consider opening a Twitter account like the Tesla CEO did. In an interview later, he demurred.

“Of course not,” Goncalves said in a telephone interview. “Look, this is a real company here. We make money. We don’t need publicity. We will continue to generate profits over and over and over again. Our profits are real, and all the publicity I get is well deserved and supported by real results. That’s us.”

Cliffs shares plunged to US$10.32, the lowest in more than a month, before the start of the company’s third-quarter earnings call with analysts. Prices pared losses to US$11.05 by the close of trading in New York Friday, hours after Goncalves used the company’s call to announce he will “buy the stock back with two hands,” if prices continue to fall.

Buying back shares “will all be done to inflict maximum pain to this guy,” Goncalves said of his company’s naysayers. “I wake up in the morning every day, looking at this guy and then go to bed at night every day thinking about this guy. And that’s a bad place to be. That’s the message that I would like to deliver in this call.”

Even with Friday’s decline, the Cleveland-based iron-ore producer has climbed 53 per cent this year. Goncalves, 60, has been CEO since August 2014.

Goncalves said in the interview he was “very mad” because Korn had used Cliffs’ 64 cents in diluted income per share from continuing operations, instead of the 67 cents in basic income per share, when he said in his report Friday that the iron ore producer “modestly missed estimates.”

“The Goldman Sachs guy should know better,” Goncalves said. “The reason why the number of our shares diluted increased is because our stock price appreciated so much that the right way to account for the convertible is the way we did. So its just a calculation. We did not issue stock, we did not dilute the shareholders, we did not do anything. It’s just an accounting thing-- an accounting thing that a research analyst must know.”

“The Goldman Sachs commodities desk has been wrong about iron ore prices, years in a row. Last year in the Goldman Sachs annual conference, I called him out and I said, ‘next year you’ve got to come here to the stage and let’s debate iron ore on the stage.’ And I called them out and I reminded Matthew Korn, because the conference is coming, reminding Korn that this year he’s going to have to bring his big brother from the commodities desk because I want to debate them in person, live. Let’s see who’s right and who’s wrong.”“He works for Goldman Sachs. So, if you were working for a company that doesn’t matter, then I wouldn’t care. But he should know better. This is an institution that has weight, and we work with Goldman Sachs.”“The Goldman Sachs research analyst for equity, the guy that doesn’t know how to calculate earnings per share.”

More From the Earnings Call:

“It’s unbelievable that these big banks still employ these type of people. You guys should resign for your lack of knowledge of things, because it’s not like you don’t understand ... our business, you don’t understand your own business. You are a disaster. You are an embarrassment to your parents.”“We are going to screw this guy so badly that I don’t believe that they will be able to only resign. They will have to commit suicide. So we are going to screw this guy so badly that will be fun to watch. That will be my first priority other than the two top priorities of finishing HBI and paying down debt. You are meeting with the wrong guy. That’s my message to you.”“With this being said, we are going to use money to reward the long term shareholders. So, if the stock continues to go down based on these kids that play with computers and somebody else’s money, we are going to buy back stock.”