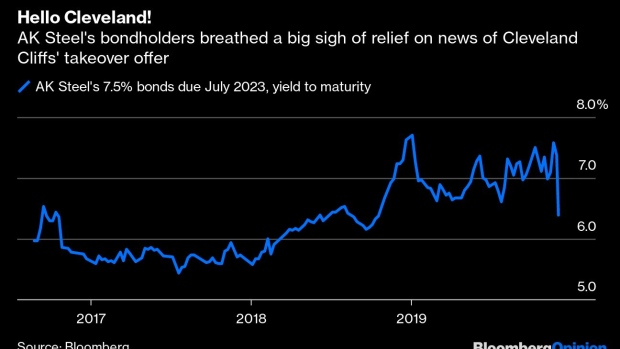 (Bloomberg Opinion) -- An otherwise fairly unremarkable Tuesday morning thankfully delivered one of the more memorable answers on an M&A call. Lourenco Goncalves, CEO of Cleveland-Cliffs Inc., was asked a sensible question about the risks around transfer pricing in the just-announced acquisition of AK Steel Corp., to which he delivered this bracing dose of honesty:

It’s our company after we close, so we can do whatever we want at the end of the day.

Except, of course, the “our” there includes the investors who own Cliffs. Some of them didn’t really agree with the spirit of Goncalves’s take. By mid-morning in New York, Cliffs shares were down more than 12%, all but wiping out the premium AK Steel’s own shareholders were being offered in the all-stock deal. Indeed, the immediate winners here aren’t the shareholders of either company, but rather AK Steel’s bondholders.

That question about transfer pricing was aimed at one of the main stated rationales for the deal: namely, that combining Cliffs’ iron-ore pellets business with AK Steel’s furnaces would boost the latter’s margins per ton. But that’s the age-old fallacy of vertical integration: Favorable pricing from one part of the merged business to another may optically boost profitability for one, but that comes at the expense of the other.

To be fair, Goncalves went on to say people shouldn’t expect Cliffs to cross-subsidize in that way. Unfortunately, the market’s reaction suggests investors may be focused more on the “we can do whatever we want” bit.

With the long-term benefits of vertical integration questionable, this deal looks more like an alloy of defensiveness and opportunism.

AK Steel is under pressure on two fronts. First, almost two-thirds of its sales are tied to the automotive industry. That is a great business for any steelmaker — except when U.S. auto sales look set to plateau or decline and major overseas markets such as China are struggling already. Steel prices have dropped sharply from the tariff-induced highs of 2018.

Second, the continued shift in market share toward electric-arc furnaces using recycled steel represents a structural problem for traditional producers such as AK Steel. This is also why Cliffs is investing in facilities producing more hot-briquetted iron, which targets arc furnaces. Wen Li, an analyst at CreditSights, points out that AK Steel’s leverage — net debt of 3.7 times adjusted Ebitda at the end of September —remained elevated even when steel pricing was good, and was likely to rise as automotive contracts get reset at lower prices.

In buying AK Steel, therefore, Cliffs provides support — including refinancing of near-term debt maturities — to a major customer that accounted for a quarter of its product revenue in 2018. Hence, even as Cliffs’ stock plunged and AK Steel’s battered stock ticked up a little on Tuesday morning, the target’s bondholders were high-fiving:

The opportunist aspect of the deal reflects AK Steel’s pricing. Cliffs has a literal moat in the form of its positioning in the Great Lakes region, shielding it from foreign competition. However, it also limits growth prospects; consensus forecasts imply earnings per share will fall almost 30% in 2020 and by 2022 will be merely flat with 2019’s level. Even if AK Steel’s vertical integration is of dubious benefit, it offers the possibility of cutting costs to boost the bottom line. At $120 million a year, the touted savings target equates to just under 40% of AK Steel’s trailing selling, general and administrative expenses, which seems like a reasonable target. Taxed, it would also boost pro-forma net income by 16%, all else equal. With the exchange ratio having halved since the start of 2018, that may have been too tempting for Cliffs to pass up.

As it stands, against the notional $800 million or so of present value associated with such potential savings, almost $300 million has been wiped off the value of Cliffs stock. It doesn’t help that two commodity producers announced a surprise deal just as we are undergoing yet another trade tantrum. Neither does the questionable vertical-integration story. This will ultimately all come down to how much cost can really be cut. On that front, at least, investors will hope management does whatever it takes.