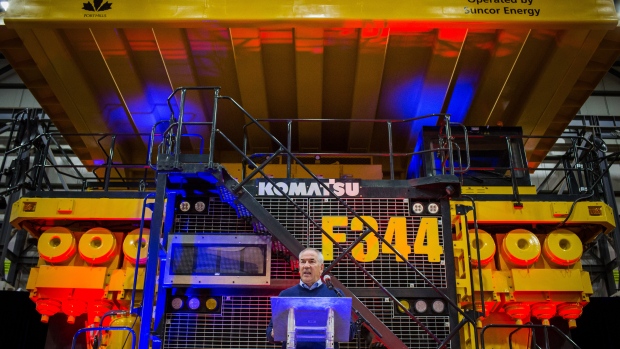 A colossal Canadian oil-sands project may be showing the way forward for an industry many thought would never see new investments.

In a forest clearing roughly the size of Cleveland, building-sized trucks dump tons of oily soil into a massive crushing facility, while conveyors move the dirt on the other end to a plant where hot water and solvents will turn it into heavy crude for U.S. refineries.

Welcome to Fort Hills, a Suncor Energy Inc. oil-sands mine in northern Alberta that had its formal opening on Monday.

The sprawling complex in Canada’s freezing wilderness was thought to mark the end of an era for big projects of its kind, but its lower carbon emissions, combined with lower costs, may offer a blueprint for new mines, say analysts including Wood Mackenzie Ltd.’s Mark Oberstoetter.

A return of investments to the oil sands, even if timid, would follow similar moves offshore. In April, Royal Dutch Shell Plc. decided to proceed with its 100,000 barrel-a-day Vito project in the Gulf of Mexico.

“We are starting to see a return to the big projects,” said Oberstoetter, lead analyst for Canadian upstream research at the firm.

The collapse of oil prices from more than $100-a-barrel in mid-2014, to less than $30 in early 2016, triggered an exodus of major multinationals from the region and forced Canadian producers to cut costs dramatically.

Now, new technologies such as driverless trucks and froth-treatments that eliminate the need for multibillion-dollar upgraders -- along with U.S. benchmark crude prices closer to $70 now -- are helping make the industry profitable again.

While the upfront spending on a mine tends to be costlier than developing more common oil-sands wells, their decades-long lifespans can make them lucrative in the future for companies willing to wait, said Kevin Birn, a director on the North American crude oil markets team at IHS Markit.

“The trick is getting over that upfront cost,” Birn said. “It depends on how you view that future cash flow. If you are willing to be patient, the attractiveness of that mine is more.”

Suncor expects Fort Hills will produce as much as 194,000 barrels a day of crude when it reaches maximum speed before the end of the year. That’s more than the output from OPEC member Gabon.

While the Calgary-based company doesn’t plan to invest in a new mine for at least the next decade, after spending more than C$17 billion ($13 billion) on the project, Vancouver-based Teck Resources Ltd. is planning what would be one of the biggest oil-sands mine ever built.

A Fort Hills shareholder, Teck is pushing for approval of the C$20 billion, 260,000-barrel-a-day Frontier mine project that goes before a regulatory hearing panel later this month. The mine could be pumping out crude by 2026 and stay in operation for another 41 years should Teck receive the go-ahead and decide to build it.

Frontier would be built near the Wood Buffalo National Park, making it the farthest north of any oil sands mine. The project faces opposition from some indigenous groups in the area who are concerned the site will harm land that they use and resources including a local bison herd.

The mine would use centrifuges to reduce the volumes of liquid in tailing ponds, requiring less overall water, said Chris Stannell, a company spokesman. The company has developed a “comprehensive mitigation, monitoring and adaptive management plan for wildlife, including bison” in consultation with indigenous communities, he said. Greenhouse gas emissions intensity would be about half the oil-sands industry average, according to the company.

Meanwhile, Suncor’s new Fort Hills mine is operating better than planned, producing 150,000 barrels a day, and will ramp up to full capacity in the fourth quarter, Suncor Chief Executive Officer Steve Williams said at the site Monday.