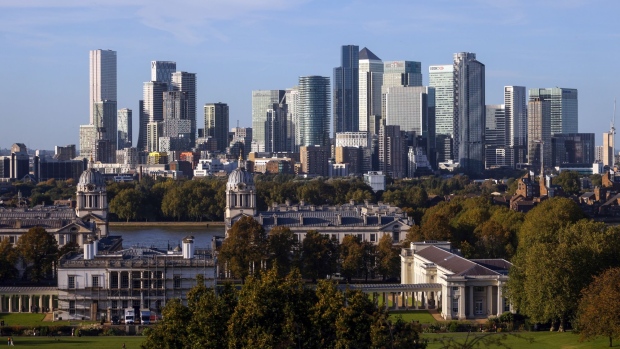 Skyscrapers in the Canary Wharf business, shopping and financial district in London, U.K., on Thursday, Oct. 21, 2021. U.K. Prime Minister Boris Johnson said the City of London will prosper outside the European Union, noting job losses and disruption to capital flows have been lower than feared. , Bloomberg

One of the largest and longest-standing residents of Canary Wharf is moving out of the east London financial district and into the City of London.

Clifford Chance has signed a lease to rent a 321,100 square-foot office development at 2 Aldermanbury Square from Great Portland Estates Plc, the landlord said in a statement Wednesday. The law firm has been based in Canary Wharf since 2003 and was among the largest users of office space in the district outside of the major banks.

“This investment ensures we have the space that is fit for our ambitions of the future,” Michael Bates, managing partner for Clifford Chance in the UK, said in the statement.

The building is expected to be completed in December 2025 and the development will be net zero carbon, according the statement. Clifford Chance has agreed to take on the whole building, and the deal is the biggest ever letting for Great Portland.

The loss of Clifford Chance is a blow to Canary Wharf, where the main lease on the building occupied by the law firm is due to expire in 2028. The district, which once challenged the City for London’s financial crown, has been racing to reinvent itself after the credit crunch highlighted the risk of being dependent on banks.

The landlord, which is owned by the Qatar Investment Authority and Brookfield Asset Management Inc., has invested heavily in transforming the district into an area where people can live and play, as well as work. Its latest push has focused on life sciences, a major growth area for the UK, as it looks to further reduce its dependence on banks that are reducing their office footprints.