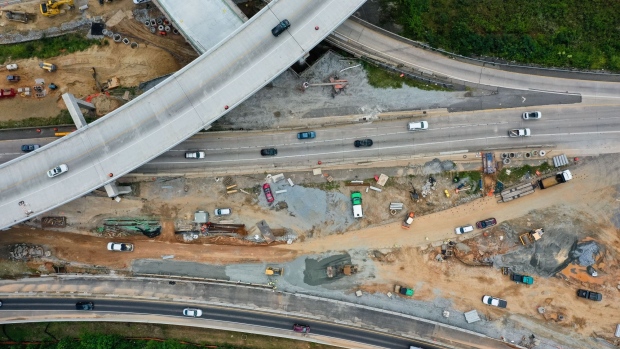 Amid much pomp and for many, much relief, U.S. President Joe Biden on Monday signed the bipartisan Infrastructure and Investment and Jobs Act into law.

By almost any measure, it is one of the greenest laws in American history, containing billions for energy efficiency, electric-vehicle infrastructure, and mass transit. But by the critical measure of whether it will keep Biden’s pledges to bring America’s greenhouse-gas emissions toward net zero by 2050, it is almost entirely without impact.

The new law offers a “nominal reduction below existing policy” for carbon-dioxide emissions, according to a preliminary analysis by Jesse Jenkins, a Princeton University professor who has been tracking the impact of the bill’s provisions. Jenkins estimates it will reduce emissions by less than 100 million metric tons more than existing policy.

By contrast, his group found that the September version of Build Back Better package, which contains money for environmental and social policy initiatives and has been championed by the president, would cut emissions by more than 1.1 billion metric tons.

The difference matters. Together that plus the new law would bring Biden close to his promise to cut emissions by 2030 to 50 percent of peak levels in 2005. The infrastructure law alone won’t.

Biden said Monday he was confident that Congress would pass the Build Back Better measure. “Together with the infrastructure bill, millions of lives will be changed for the better,” he said.

There is much in the new infrastructure law that climate advocates can celebrate. It provides $39 billion to modernize public transit, $66 billion for Amtrak maintenance and $65 billion for desperately needed power-grid upgrades.

But the law is full of provisions that are as favorable to fossil fuels as their carbon-free alternatives. A modernized power grid that still carries fossil-fuels energy doesn’t in and of itself reduce the nation’s carbon footprint. The plan includes $5 billion for new school buses, although the program would allow half to go toward buses that run on natural gas or propane as opposed to being all electric.

The potential of the new law’s climate investments hinges almost entirely on the passage of the second bill, Build Back Better, which includes money to help decarbonize the electric grid and heavily polluting industries such as steel and cement. West Virginia Senator Joe Manchin, a Democrat and a crucial vote, has said he wants to see the Congressional Budget Office’s analysis of the bill, meaning it’s unlikely to pass soon.

“The infrastructure bill includes very few pieces that would lead to direct emissions reductions, but includes lots of funding for very important technology that will enable the emissions reductions we find the BBB could achieve,” explains Robbie Orvis, senior director of energy policy design at Energy Innovation, a nonpartisan research group in San Francisco.

Take, as the prime example, the fact that the infrastructure law authorizes $7.5 billion to build a nationwide network of charging stations for electric vehicles. That’s an important step, but few analysts think that alone will inspire an adequate number of Americans to switch from combustion-engine cars to electric vehicles. That motivation will require the $7,500 electric-car purchase credit that is in the BBB.

“We won’t get to an acceleration in E.V. sales without the purchase credit,” Ellen Hughes-Cromwick, a senior resident fellow for the climate and energy program at Third Way, a Washington-based center-left think tank, said in an analysis of the bills published in Sarasota Magazine. “The reason is that, between now and 2025, we still have relatively high battery costs in electric vehicles.”

Without measures to implement and energize the plans begun with the law Biden signed Monday, a yawning gap remains between lofty promises and ever-hotter reality.