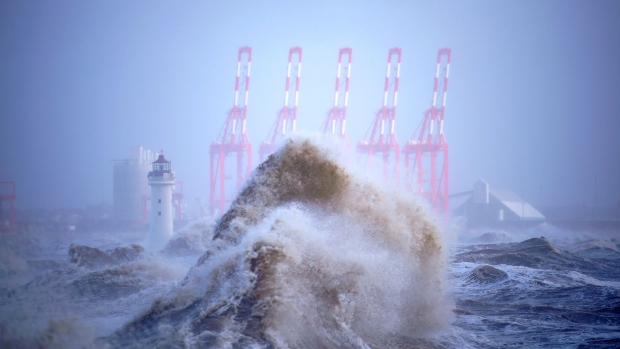 NEW BRIGHTON, UNITED KINGDOM - JANUARY 03: Waves whipped up by the wind of Storm Eleanor lash against the sea wall on January 03, 2018 in New Brighton, United Kingdom. Overnight Storm Eleanor brought 70-100mph gusts and torrential rain to some parts of the UK and Ireland creating floods and cutting electricity supplies in some areas. A yellow warning by the Met Office is still in force. (Photo by Christopher Furlong/Getty Images) , Photographer: Christopher Furlong/Getty Images Europe

In the run up to the 2020 U.S. election, a meme started making the rounds on Twitter. “Transport is climate policy,” someone would tweet above an article about subway improvement. “Childcare is climate policy,” they’d say about a paid maternity leave proposal. The quip applied to almost everything—even voting by mail.

The idea was that it all leads back to global warming and how we’re preparing for its effects. Early economic models assumed only outdoor-oriented sectors such as agriculture and tourism would be badly affected. We now know that many facets of society will suffer as the atmosphere warms. Poorer countries will generally be hit the hardest. Richer economies will see inequality widen.

Coping with more heatwaves, floods, and natural disasters will be expensive. The United Nations Environment Programme says developing countries alone will need to spend up to $300 billion a year by the end of the decade.

One way to raise the funds is to tap financial markets. Someone’s cost could become another person’s opportunity. With the appetite for sustainable investing growing rapidly, surely the only challenge is coming up with a way to link investors to projects? We like to think that once there’s a template for an adaptation bond or other instrument that can be easily replicated and packaged into portfolios, shifting the money to where it's most needed will be easy.

The reality, as always, is different.

A few years ago I worked on a project that tried to develop a climate adaptation finance mechanism. We brought together representatives from insurance, banking, pension funds, state and local governments, and academia. The group learned a lot, but came up empty-handed in terms of a working framework.

Most of the dedicated adaptation finance mechanisms we identified (and there were very few) were either very small or very specific. A special District of Columbia Water and Sewer Authority debt instrument in the U.S. distributed the risks and benefits of an untested method for flood management. An insurance fund helped a Mexican reef collect fees from coastal tourism businesses to help restore corals after hurricanes hit. There were few common elements. Each instrument was an elaborate and bespoke arrangement rather than a formulaic deal that could be multiplied and easily traded with low transaction costs.

That’s because of the nature of the underlying “asset.” Sure, in theory, you could securitize the construction of a seawall and capture returns via fees from wealthy coastal dwellers or local councils. But seawalls are not widgets. Each has to be uniquely designed for a specific location and its conditions. There are few economies of scale.

There’s also no established norm about how the costs of climate adaptation projects should be shared among those who are being protected. Will enough residents willingly pay for our theoretical seawall, either directly or via their taxes? Who’s being protected, and at whose expense? Structures that protect one stretch of beach can often create problems further along the coastline.

Adaptation doesn't fall into a neat category. It can mean investing in infrastructure or designing programs to protect nature. It can involve constructing big sea walls, but it can also be about retaining trees on city streets, or ensuring access to clean drinking water. Right now these measures are too small to interest big pension funds and asset managers. A report by UNEP and others found only about two dozen projects larger than $25 million over the last few years.

And there are lots of other worthy causes competing for the same pool of sustainable investing cash. Protecting against climate change early seems like a no-brainer. It will avoid far greater costs down the line. But so does universal early childhood education and improving sewer systems. Investors want returns that are commensurate with the risk, relative to other opportunities.

For developed countries, there’s an easy answer, one that can raise cheap finance and whose actual purpose is to peacefully navigate the competing interests of citizens. It is, of course, government bonds. Until a year ago, austerity economics and “balanced budget” politics mitigated against this, even at low interest rates. But the response to Covid-19 showed that financial authorities are now willing to load up on debt when there’s a real public crisis at hand. Some governments have also recently issued "resilience bonds," which function more like old-school public debt finance, rather than a new way to fund adaptation.

That won’t work everywhere. The poorest developing countries either have trouble accessing capital markets, or pay a hefty premium to do so.

That’s why it’s so important that rich countries agreed to mobilize $100 billion a year of climate finance to help developing nations. The pledge was made hastily in the last moments of a chaotic United Nations meeting in Copenhagen in 2009. Developed economies have failed to deliver.

But this is why climate is a question of justice. We’re all entering a hotter future and poorer nations desperately need the funds that were promised. Alternative means of financing resilience measures are limited.

The horrific Covid outbreak happening in India, while much of the developed world shuffles into vaccination queues, is a wake up call. The nation is one of the developing countries that’s expected to suffer most from climate change. The way global inequalities have manifested during the pandemic are only a preview of what will happen in the coming decades as the planet warms.