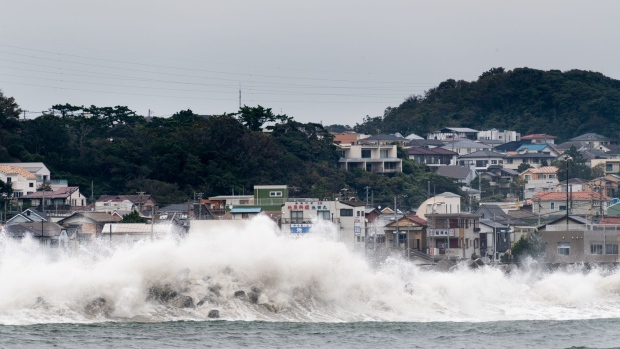 Waves break on the shore ahead of Typhoon Hagibis in Fujisawa, Kanagawa Prefecture, Japan, on Friday, Oct. 11, 2019. Typhoon Hagibis, which is expected to bring heavy rain and violent winds, has forced factory and shops to close, with shoppers clearing out shelves at some stores as they scrambled for bottled water and instant noodles. , Bloomberg

(Bloomberg) -- The effects of human-caused climate change were responsible for roughly $4 billion of the $10 billion in insured losses resulting from Typhoon Hagibis that struck Japan in October of 2019, according to a new analysis of the storm. Hagibis, which killed about 100 people and brought torrential rainfall to Tokyo, was one of the costliest Western Pacific typhoons on record, scientists at the University of Oxford and Imperial College London said in a study published Wednesday in the journal Climatic Change. They estimated that the effects of climate change increased the likelihood of extreme rainfall by about 67% the day the storm made landfall.

One reason is that as the atmosphere warms it can hold more moisture — meaning storms like Hagibis have the potential to drop an increasing amount of rain, the report said.The research on extreme weather in Japan is the latest assessment of how inaction on curbing fossil fuel emissions is rapidly accelerating the cost of recovery and insuring people and property in the paths of more destructive storms. Earlier this year the White House — for the first time ever — published a formal account of the federal government’s climate-related financial risk exposure. The Office of Management and Budget found the US could spend an extra $25 billion to $128 billion annually by the end of the century on expenditures linked to climate-connected weather events such as hurricanes, floods and wildfires.“Not acting against climate change will be much more expensive than reducing emissions and adapting to a warmer world,’’ Sihan Li, a senior research associate at University of Oxford, said in an emailed statement.  Typhoon Hagibis cut electricity for more than 400,000 power customers. It came on the heels of another storm the previous month, which toppled two transmission towers and almost 2,000 power poles owned by Tokyo Electric Power Co. Holdings Inc., contributing to an outage that affected more than 900,000 customers.In the aftermath of the storms, Japan encouraged homeowners to invest in energy storage systems to marry with existing rooftop solar in a bid to make the nation’s power grid more reliant.