Investors will be hurt by the energy transition if you're on the wrong side: Clean tech investor

It would be one thing if there was “an endless pot of gold” that Canadian property and casualty insurers could turn to offset the rapid increase of weather-related losses.

But, according to new research by DBRS Morningstar shared with BNN Bloomberg, the pace of climate change in Canada — a warming rate twice as much as the global average per federal figures — means much of that is becoming completely unsustainable.

Domestic insurers will slowly begin to withdraw property coverage in many regions deemed too costly, if current climate modelling and weather circumstances don’t change, DBRS Morningstar said in the report released this week.

“So far, in our lifetimes, we’ve seen insurance for property and casualty risks operate in a certain way that has worked well in our favour for decades upon decades,” Nadja Dreff, senior vice-president at DBRS Morningstar, said in an interview Friday.

“But now, climate change is calling into question the very existence of the risk-pooling mechanism — the pot of gold where they turn to, and for which we all chip in when we buy insurance — that allows it all to be a possibility in the first place. So, you’re going to worry every day about what happens to your home, your property and your business without that peace of mind.”

No climate-related stress testing from Canadian insurers yet

Headquartered in Toronto, and with offices in major global cities, DBRS Morningstar is the world’s fourth-largest credit ratings agency, based on market share.

For Dreff, who conducted the new research for the agency, it all started by looking at the numbers about just how many insured, weather-related losses Canada has incurred over the years.

She looked at the figures from 1983 to 2020, inflated them to match current dollar values, and promptly saw a disturbing trajectory emerge.

“The charting is all there now. And it all just looks very unsustainable,” said Dreff, who has previously spent years working as an economist and financial analyst for the Insurance Bureau of Canada and the Bank of Canada.

“Insurers play a very vital role to the economy, in my view. They’re essentially the facilitators of what sustains economic activity because they remove big barriers you, me and really anyone faces with risks so we don’t have to take big hits or losses when things go wrong.” 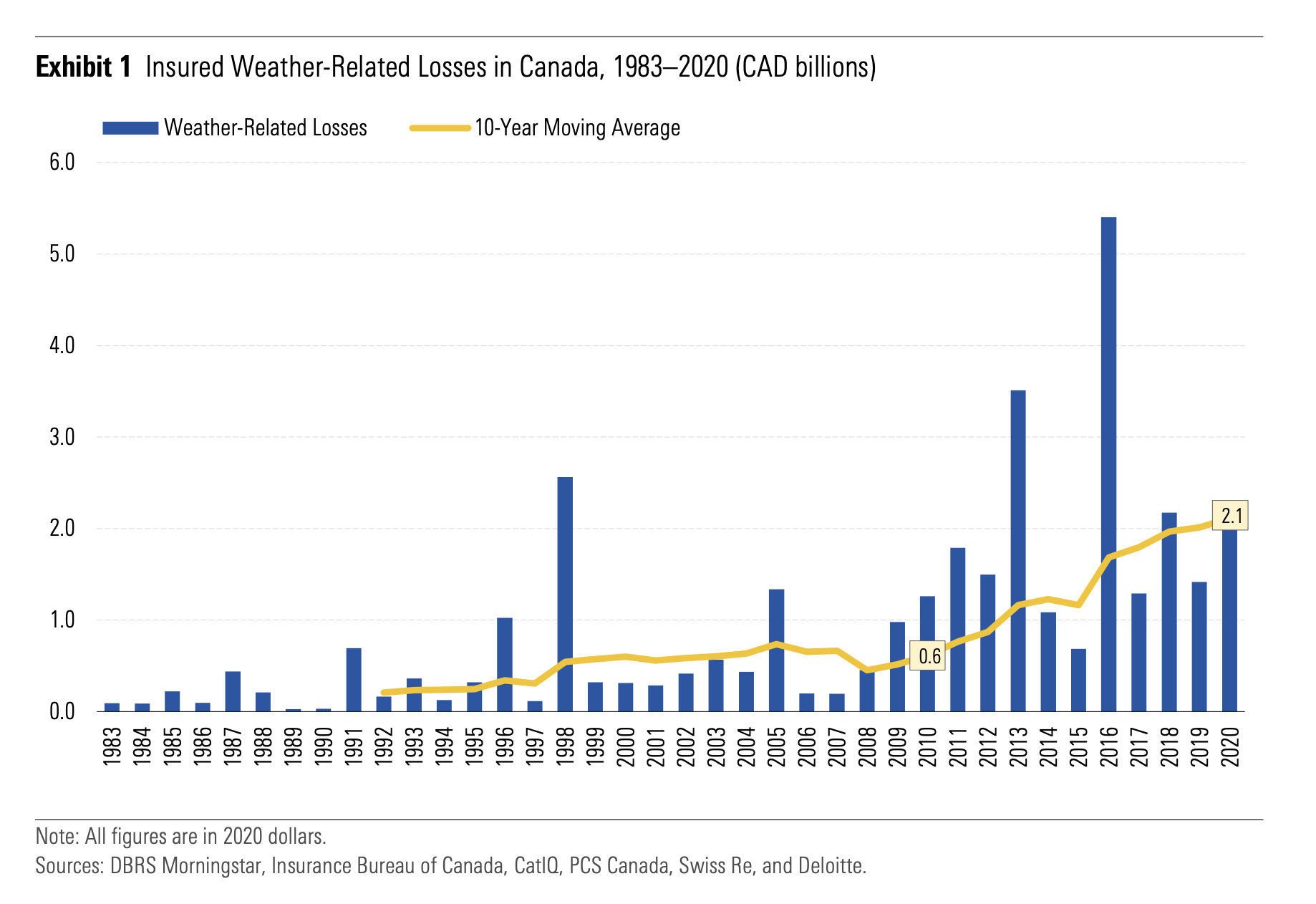 “That’s why this research is such an important look inside that problem,” she said. “See, what a big chunk of the climate change problem gets resolved through is by reinsuring the risk from the insurers’ side. It’s the most widely used management tool Canadian companies use in this kind of case, and it’s done through the help of the global and foreign market.”

Put simply, Canadian insurers are employing a tool that allows them to pay out coverage claims for excessive losses by signing up for reinsurance — thereby offloading for reinsurers outside Canada to pay out on their insurance obligations.

For example, such was the case after the 2016 Fort McMurray wildfires, the largest insured event in Canadian history at $4 billion. Despite the large claims payments, Canadian insurance companies fared relatively well, achieving a profit by the end of the year thanks to global reinsurers.

“However, now we’re seeing severe weather events become more correlated around the world,” said Dreff. “And that makes the situation quite trickier because reinsurers could opt out of Canadian reinsurance because it’s becoming too costly for them.” 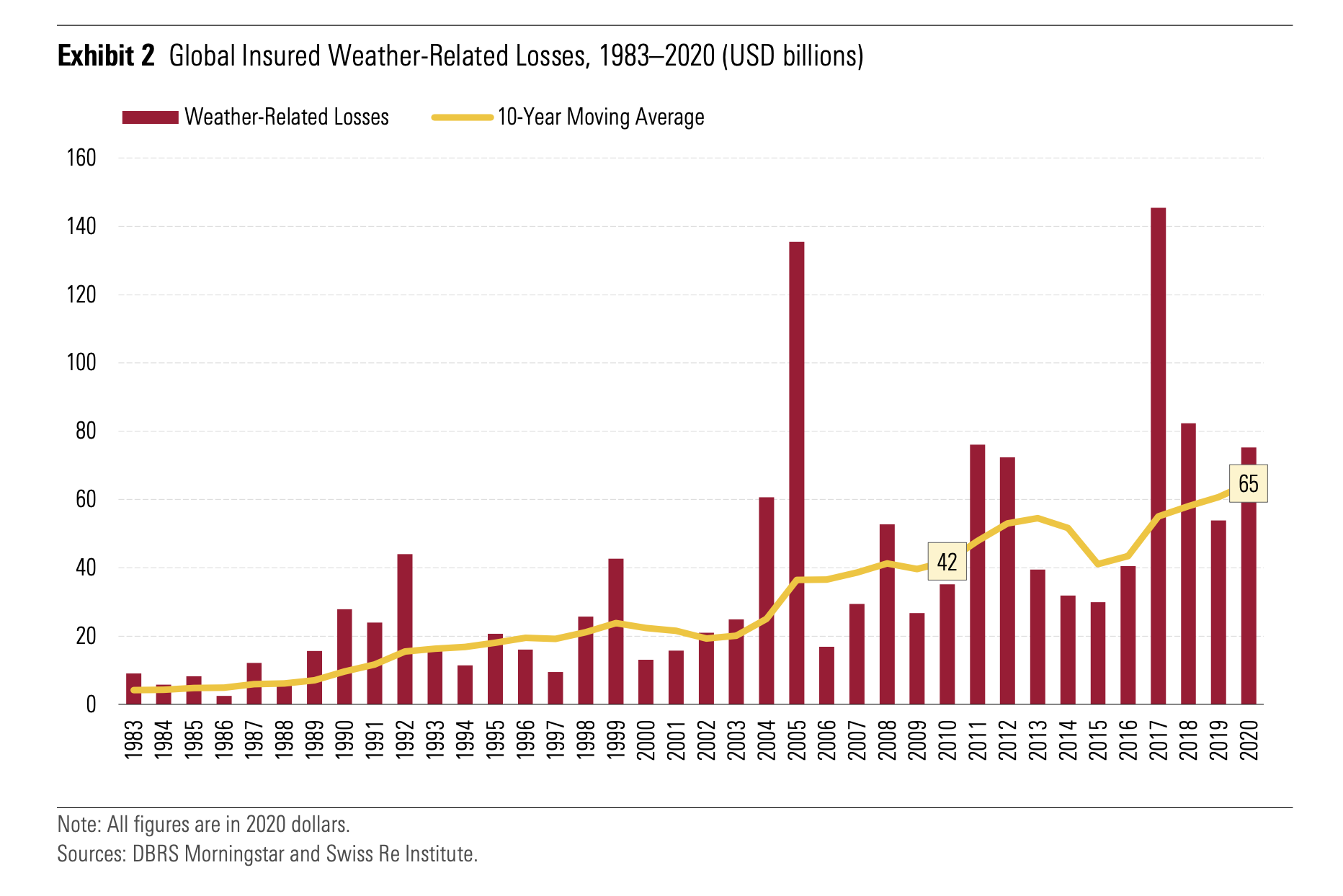 This analysis also stems from the fact that Canada’s climate warming is exceeding many other countries around the world — at least twice as much compared to the global average, according to “Canada’s Changing Climate Report”, published by the federal government in 2019.

“It’s all preliminary at this point, because climate-related disclosures are far from consistent or comprehensive at this stage from insurance companies,” said Dreff. “So at the moment, even we at DBRS Morningstar haven’t updated any property and casualty company's rating or trend specifically as a result of climate change risk; although it does factor into our overall credit risk assessments.”

For now, this report is about making sure Canadians are aware of what might come next.

“We’ll be keeping a close eye on this,” said Dreff. “Because, as we all know, the consequences of climate change is an ongoing and ever-increasing crisis.”