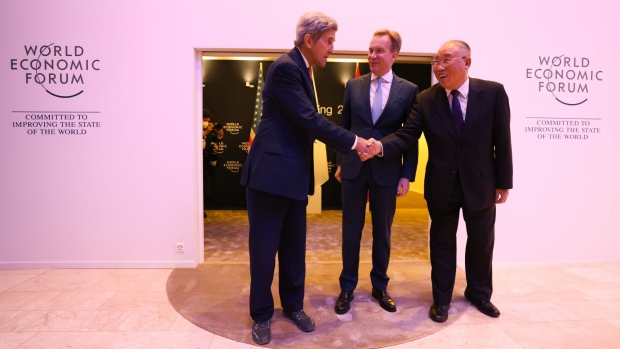 A war in Europe, food shortages in developing countries and surging global inflation haven’t stopped the rich and powerful at the World Economic Forum in Davos from talking about the climate crisis.

As many as a third of the panel discussions on the main stage are related to global warming. Few chief executive officers get away with an interview that does not touch upon ESG — the investing approach that takes into account environmental, social and governance factors. Even wine served at a party outside the main conference area came with the host’s pitch for his company’s sustainability app.

Why? “It’s a way to deal with the guilt,” said one attendee as he sipped the wine that had just been served. “They know they are messing up the planet.”

It wasn’t long ago that climate change wasn’t even a topic of discussion on a single panel, recalls Laurence Tubiana, one of the architects of the Paris Agreement who is now chief executive officer of the European Climate Foundation. In 2014, only a year before the landmark accord was signed, all climate-related panels happened in a tent outside the main conference area. “It’s totally different now,” she said.

The scientific case to act on reducing emissions has been clear for more than three out of the five decades that WEF’s annual gathering has been happening. But there’s always been some problem that’s more urgent to discuss than climate change.

But many of the crises the world faces today, including food shortages, are made worse because of rising global temperatures. “The crisis is here,” said John Kerry, the US’s climate envoy. “People can see what the impacts are all around the world.” Just this month, South Asia has suffered from killer heat waves and floods, wildfires burned in the US West and extreme temperatures have hit the Middle East and southern Europe. Scientists are now able to quantify the changing climate’s role within days or weeks of some extreme weather events.

That’s made it impossible for elites at WEF to ignore the problem. “I’ve often been critical of the powerful at Davos,” said Johan Rockstrom, a director of the Potsdam Institute on Climate Impact Research. “But I must admit that this time high-level politicians and the biggest economies in the world are really trying to keep two balls in the air at the same time.” At least some countries seem to be committed to ensuring that the short term hit of increased fossil-fuel use during the current energy crisis doesn’t lead to building infrastructure that locks in carbon burn in the long term.

That’s not to say the panel discussions will lead to world-changing solutions right away or that they are even particularly revelatory. A round up of Davos platitudes about rising sea levels and cheap renewables just from this year’s event would put anyone to sleep.

Still, optics matter. Among the handful of Chinese officials who were allowed to leave the country’s strict Covid lockdown was its climate envoy, Xie Zhenhua. He reaffirmed the world’s largest emitter’s promise to do what’s needed to meet the goals of the Paris Agreement, despite China doubling down on coal to combat the energy crisis.

As global emissions continue to rise, the Davos crowd is in agreement that the current system can eventually be the solution, just with some minor tweaks. “On climate, there’s a broad consensus here,” said Adam Tooze, professor of history at Columbia University. Those attending the meeting “imagine they can find a great bunch of technological solutions and capitalism will do its job of creative destruction.”

Spending time talking about these solutions can be a form of therapy. “They want emulation and they want to reinforce one another,” said Tooze. “They don’t want to feel lonely and weird.”

Focusing on climate solutions can also be a way to avoid talking about the really hard subjects. “Globalization, which is at the core of the World Economic Forum, is under threat,” Tubiana said. “People don’t understand how big a threat that is and how to respond to it.”

Russia’s war on Ukraine has brought fresh attention to the risk of China invading Taiwan. If China were to become a pariah state like Russia, what would happen to the huge amount of capital that’s been invested in the Asian giant? “The people coming to Davos don’t want to tackle such politically difficult issues now,” Tubiana said.

In that sense, climate change becomes the easiest global problem to solve for Davos-goers. “It’s a longterm issue and the time horizon over which a conference like this makes sense,” Tooze said. The solutions proposed here “are not radical,” he said. “It’s a place of win-win promises.”