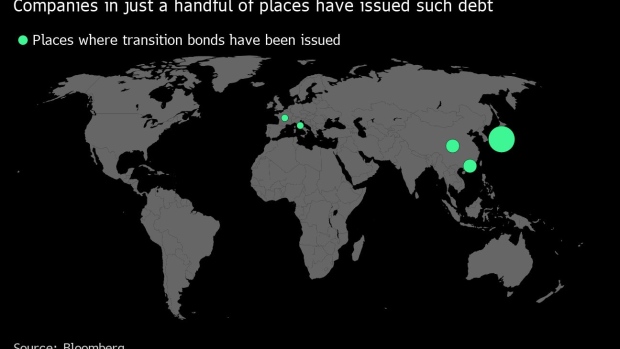 (Bloomberg) -- Japan’s push to encourage transition debt to help high emitters clean up their act means that it’s diverging from the rest of the world in developing environmental financing.

The government has drawn up detailed roadmaps to help companies shift to cleaner technology, resulting in more of the country’s issuers selling transition bonds than elsewhere. And now Eneos Holdings Inc., Japan’s largest oil refiner, is preparing to sell a novel transition-linked bond, which is pinned to its long-term carbon-dioxide reduction targets.

Japan’s moves may help it skirt around some problems that have arisen with environment, social and governance debt in Europe. Some oil companies there have opted to sell green bonds, fueling skepticism among certain investors and potentially devaluing the market.

Japan’s trade and economy ministry wants to “avoid getting claims of greenwashing by getting companies to explain to investors that their technology transition is realistic and science-based,” said Motoko Ogawa, deputy director at the ministry’s environmental economy office in Tokyo.

Five Japanese borrowers have now sold yen-denominated transition debt, after power generators Jera Co. and Kyushu Electric Power Co. priced such bonds this week, and more are in the pipeline. That compares with just one issuer from France and Italy respectively, and a couple each from China and Hong Kong.

Until now, though, the funds raised from the deals have been earmarked for specific projects. Eneos potential transition-linked offering is new because the refiner would have to make donations or take other steps if it doesn’t meet its targets, one of which is to decrease its C02 emissions by 46% by the end of fiscal 2030 compared with 2013. The oil company may sell the bond as early as June.

Transition bonds have stumbled elsewhere in the world because of “the extra burden of demonstrating and substantiating” how the transaction contributes toward sustainable practices for the issuer, Kamran Khan, head of ESG for Asia-Pacific at Deutsche Bank AG, wrote in an email.

In Europe and the Middle East, oil companies have sold green bonds, leaving some investors unconvinced by the issuers’ climate-friendly credentials and adding grist to concerns of greenwashing.

In Japan, heavy industries such as utility, steel, chemical sectors are responsible for about 70% of the nation’s greenhouse gases, according to data from the economy ministry.

Noriaki Nomura, head of debt capital markets at Mitsubishi UFJ Morgan Stanley Securities Co., one of the banks on the Eneos deal, said he excepts more transition-linked bonds in large amounts because it allows companies to focus on longer-term carbon reductions.