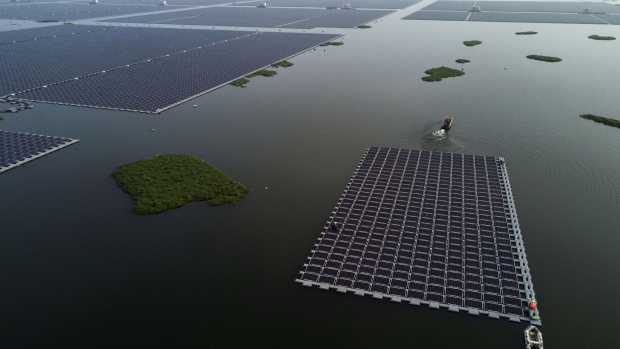 HUAINAN, CHINA - JUNE 14: A boat pulls a group of solar panels to be connected to a large floating solar farm project under construction by the Sungrow Power Supply Company on a lake caused by a collapsed and flooded coal mine on June 14, 2017 in Huainan, Anhui province, China. The floating solar field, billed as the largest in the world, is built on a part of the collapsed Panji No.1 coal mine that flooded over a decade ago due to over-mining, a common occurence in deep-well mining in China's coal heartland. When finished, the solar farm will be made up of more than 166,000 solar panels which convert sunlight to energy, and the site could potentially produce enough energy to power a city in Anhui province, regarded as one of the country's coal centers. Local officials say they are planning more projects like it, marking a significant shift in an area where long-term intensive coal mining has led to large areas of subsidence and environmental degradation. However, the energy transition has its challenges, primarily competitive pressure from the deeply-established coal industry that has at times led to delays in connecting solar projects to the state grid. China's government says it will spend over US $360 billion on clean energy projects by 2020 to help shift the country away from a dependence on fossil fuels, and earlier this year, Beijing canceled plans to build more than 100 coal-fired plants in a bid to ease overcapacity and limit carbon emissions. Already, China is the leading producer of solar energy, but it also remains the planet's top emitter of greenhouse gases and accounts for about half of the world's total coal consumption. (Photo by Kevin Frayer/Getty Images) , Photographer: Kevin Frayer/Getty Images AsiaPac

(Bloomberg) -- Put aside the trade and technology wars. The next race for global political and economic supremacy will focus on climate.

That’s according to Bank of America Corp.’s research group, which said climate change will be this decade’s most important theme, just as technology underpinned economic growth during the past decade. China has spent twice as much as the U.S. on climate action, said Haim Israel, the bank’s head of global thematic investing research, in a report Monday.

“We believe climate strategies offer a route to global supremacy,” he said. “Whether through regulation, limits on exports, tariffs or significant investments, we believe the U.S. and China will do whatever it takes to take the lead on climate action.”

The economic impact of climate change could reach $69 trillion this century, and investments in the energy transition need to increase to $4 trillion a year, Israel said. That will lead to more than $100 billion a year in research and development.

Bank of America estimates that the potential market capitalization for companies tackling climate to be about $6 trillion across things like renewables, electric vehicles, and environmental, social and governance. China dominates EVs and batteries, while Europe excels in renewables, the report says.

“It‘s not just about offense, but also defense,” he said. “Tensions could escalate via China’s dominance in solar-supply chains and rare-earth metal production, domestic-focused policies like ‘Made in America,’ and Europe’s push for local EV battery supply chains.”

Israel’s report echoes billionaire investor Jeremy Grantham, who said in November that green energy will not only be economically important in the coming decades, but like oil was before, “incredibly geopolitically important.” Grantham suggested the U.S. start a major public works program akin to the Marshall Plan to revive economic growth amid the pandemic and threats caused by global warming.

China-U.S. relations have been at the forefront in the past decade, while Europe lagged behind. But that could change given its leadership in climate policy, with the region home to 70% of ESG mutual fund assets, and having advanced green regulation and a “significant” headstart on decarbonization, Israel said. Eight of the 10 largest global clean-tech companies are European.

Given peak oil may be reached this decade as EV penetration accelerates, Europe is set to generate 85% of all its energy from renewable sources, compared with about 50% in China, the report said.

The next battleground for geopolitical supremacy after climate will be space, with satellite imaging and exploration key for climate monitoring and research, Israel said.

While space has always been a domain for superpower rivalry sparked by the Cold War, climate focus, telecommunications and sixth-generation technologies “could intensify this and mark the next phase of U.S.-China tensions and beyond,” Israel said.