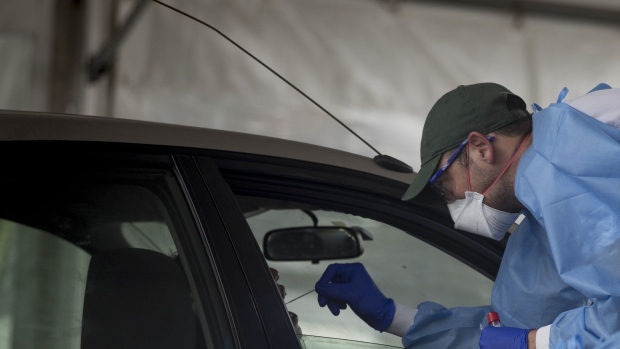 (Bloomberg) -- Australia’s last and most fervent defender of Covid-zero isn’t quite ready to live with the virus.

Business leaders and shut-out families have voiced frustration at a last-minute decision by Western Australia to delay a planned reopening indefinitely, pausing the country’s shift to fully reopen. While the rest of the nation has moved to live with the disease in recent months, the state held off amid concern about low vaccination rates.

In a late night press conference on Thursday, Premier Mark McGowan canceled the planned Feb. 5 reopening, warning the rapid spread of the omicron variant had changed things and he didn’t want to see a “flood of disease.” He didn’t announce a new date for restrictions to be lifted.

The front page of the state’s only major newspaper was somewhat scathing following the decision:

Western Australia has stuck with some of the strictest border curbs in the Asia-Pacific region, with residents largely enjoying life as normal in the past two years and the state recording just nine deaths during the pandemic. It’s become an outlier as the rest of the country and other nations loosen border rules in favor of keeping their economies humming.

Business leaders condemned McGowan’s decision, saying it would put a handbrake on the state’s economy. At a size three times larger than Texas but with a population of just 2.7 million people, Western Australia is the center of the nation’s resources industry, including the massive iron ore operations of miners such as BHP Group Plc and Rio Tinto Plc.

Postponing reopening showed a “lack of courage and a lack of planning,” said Kristian Stratton, Western Australia manager for peak employer lobbyist Australian Industry Group. Stratton said the state was suffering major skills and labor shortages, wage pressures and price increases due to the closed border, and his members were angry.

“The most disappointing thing is, once again, there’s no certainty on when this will change,” he said.

Despite the pandemic, Western Australia’s mineral and petroleum sales reached a record A$210 billion ($151 billion) in the 12 months to June 30.

Since the rest of Australia removed major restrictions on travel and gatherings in recent months, Covid cases have soared, leading to record numbers of deaths in major states and shortages of testing equipment. On Dec. 20, Australia had confirmed just over 250,000 infections. Just one month later, that number has grown to more than 1.5 million.

Health workers in Western Australia had been loudly protesting the planned reopening date, saying the health system wasn’t ready to handle the likely surge in omicron infections. Data released in January showed patients had waited in ambulances outside hospitals for more than 52,000 hours last year, according to the Australian Broadcasting Corporation, the longest times on record.

Prior to McGowan’s announcement, there were plans to set up triage tents outside major Western Australian hospitals in preparation for a surge of Covid-19 cases. However a few extra weeks or months of waiting won’t make the health system any more ready, Australian Medical Association President Omar Khorshid said.

“Omicron is here already and it will cause a significant outbreak in WA soon enough,” he said in a tweet. “Sticking our head in the sand won’t make it go away. Let’s prepare!”

The extended border closing could also impact a national election due by May. With both the federal government and the opposition eyeing several important seats in state, McGowan’s decision will put campaigning there on hold for the foreseeable future.

Although the Western Australian government’s Covid-19 elimination strategy was originally hugely popular, with McGowan easily winning another term in 2021, some of the state’s citizens were beginning to tire of the restrictions.

Pharmacist and Melbourne resident Richie Saldanha told the ABC on Friday he hadn’t seen his family in Western Australia since May last year and now a planned trip home was “in ruins.”

“I missed my Mum’s birthday,” he said. “Who knows when I’ll be able to go back? We thought there was a bit of certainty.”