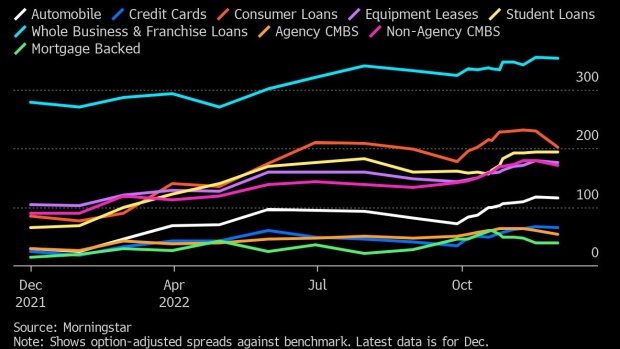 (Bloomberg) -- As interest rates rise, so are concerns about the credit quality of the floating-rate loans that back the $1.2 trillion market for collateralized loan obligations.

Loans are widely believed to face higher downgrades next year, and according to Amherst Pierpont Securities LLC, even assuming average levels of cuts, CLOs will probably get hurt. Most of the structures feature a guideline that can press them to cut off payments to holders of their riskiest bonds, and maybe even multiple groups of noteholders, if too many of their loans are cut to the CCC tier.

The rising focus on credit risk marks a likely shift in 2023, after the Federal Reserve reset the field of play in financial markets with aggressive interest rate hikes to battle the worst inflation in 40 years.

“If 2022 was a year of interest-rate risk and volatility, then 2023 will be a year of credit risk and fundamentals,” said Pratik Gupta, head of CLO research at Bank of America Corp.

For much of this year, investors focused on the positives when it came to buying loans: interest rates were headed higher, which boosts yields on floating-rate debt, and corporate balance sheets were still relatively strong.

But as rising interest help investors earn higher coupons, they are also pressuring companies’ cash flows. It’s put a squeeze on companies that can be highly levered, giving them less room to maneuver in the event of a recession.

The US speculative-grade default rate could rise to 5% by October of 2023, up from 1.5% for the same month this year, if there’s a recession in the US by the second quarter and 0.4% growth in gross domestic product overall next year. That’s according to baseline projections by Moody’s Investors Service.

The fallout may hit CLOs. About 70% of all leveraged loans have been purchased by CLOs, and nearly a third of those in CLO portfolios are rated B-, just one notch above CCC, according to BofA.

If ratings companies downgrade enough of those loans to CCC -- in some cases more than 7.5% of the portfolio -- then CLOs may look to begin diverting cash flows from lower-rated tranches, hurting investors. That scenario is more likely than not, according to a recent note by Amherst Pierpont Securities LLC.

If a US recession arrives and is particularly bad, then the damage could be worse.

CLO managers may also have a harder time next year persuading investors to buy the bonds they issue. Higher interest rates may push yields on other safe kinds of debt, such as US Treasuries, to higher levels, giving investors more reason to buy those securities instead of CLOs.

That means spreads of CLO tranches could be pushed higher in order to entice buyers, in turn shrinking the all-important price arbitrage between the rates at which CLOs borrow money from investors and the rates at which they invest it in the underlying loans.

“There is competition from plain vanilla assets, making it unlikely CLOs outperform more than the limited compression we expect in the senior-most tranches,” said Rishad Ahluwalia, head of global CLO Research at JPMorgan Chase & Co.

Lauren Basmadjian, co-head of liquid credit and head of US loans & structured credit at Carlyle Investment Management LLC, said she expects managers to issue more so-called “print and sprint deals” next year. With those, managers buy up lots of loans quickly in the secondary market to take advantage of fleeting price changes, rather than buying them over a period of months.

“CLO issuance year-to-date has been really robust considering the market environment. From here on, we would expect issuance to slow,” said Octagon’s Law in an interview.

ABS deals in the queue include two recovery bonds, one by United Electric and another by CoServ Electric. A nearly $1 billion prime auto loan ABS by Ally Bank is also in the market, along with a potential issuance by Concord Music Royalties.

--With assistance from Carmen Arroyo and Jill R. Shah.