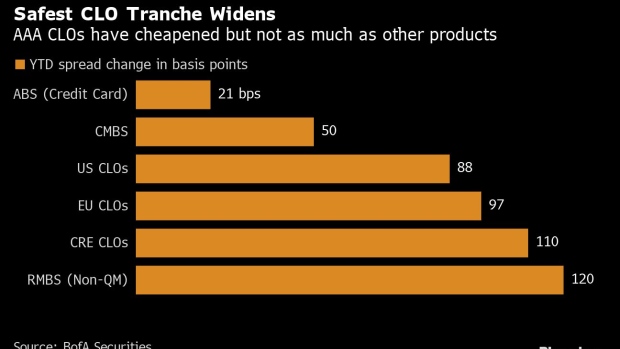 (Bloomberg) -- The biggest buyers of leveraged loans are looking to repeat a strategy that generated gains of more than 60% during the early part of the pandemic, but raising money for these funds is getting harder.

Money managers are quickly buying loans in trading markets and funding their purchases by selling bonds known as collateralized loan obligations. These “print-and-sprint” transactions differ from regular CLOs, where firms buy new loans from companies over months, temporarily funding their purchases with credit lines from banks until they sell CLOs.

Columbia Threadneedle Investments is one of the latest managers to sell print-and-sprint CLOs. Carlyle Group Inc. sold another such deal in Europe -- a feat not accomplished there for years. Managers like Blackstone Inc., Investcorp and Ares Management Corp. are also getting the transactions done, as is Apollo Global Management Inc.

“Any savvy manager would want to take advantage of this situation,” said Jerry Howard, head of the US bank loan team at Columbia Threadneedle.

More are planning to follow, according to people with knowledge of the matter. But executing the deals is becoming increasingly difficult as CLOs are having to pay more to finance their transactions, particularly when selling the highest-rated bonds they offer, where yields have jumped in recent weeks. Higher funding costs have also cut into the potential profits from a CLO, because loan prices haven’t moved as much.

These headwinds have damped new sales for CLOs of all kinds, with $10.82 billion of deals so far this month, down from $13.5 billion for the month of May.

“Print-and-sprints may still work episodically, if you can thread the needle for assets and liabilities and produce market returns,” said David Moffitt, co-head of US credit at Investcorp, in an interview.

CLO managers are opting for print-and-sprint deals as the S&P/LSTA Leveraged Loan Price Index has fallen close to its lowest level since October 2020, with prices having dropped to 93.1 cents on the dollar on Friday, a decline of about 5 cents from April. CLOs, of which there are more than $1 trillion outstanding, are the biggest buyers of leveraged loans.

“Each print-and-sprint is a bet on how cheap the manager can buy the assets,” said Chris Gilbert, head of US CLO banking at Natixis. “It’s a decent return if you do the trade and much better if the market stabilizes later and the transaction can refinance its debt at a much lower cost.”

Timing print-and-sprint deals is crucial. The best-performing CLOs that were assembled in 2020 generated returns of more than 60% for holders of the riskiest securities, at least for transactions that have been redeemed so far, according to Bank of America Corp. research. These weren’t all print-and-sprint deals, but many were.

Funding deals now is getting more expensive. In early May, AGL Credit Management priced a $400 million print-and-sprint after leveraged loan prices started slipping, according to people familiar with the matter, and Investcorp sold its own $406.6 million deal on May 13, with the highest-rated CLO securities selling for 1.55 percentage points above the benchmark.

By the time Ares began marketing its own print-and-sprint in late May, the private credit behemoth had to boost AAA yields sharply to attract investors, finishing at 183 bps above the benchmark -- which quickly became the new clearing level.

Now transactions are being sold with AAA portions closer to 190 bps or 200 bps above the benchmark. Many AAA investors are reluctant to buy until they’re sure the market has stabilized, so the highest-rated CLO securities have become even harder to sell.

“A lot of AAA investors haven’t been buying this year and many of the ones that are want longer non-call periods,” said Justin Pauley, head of CLO Capital Markets at Brigade Capital Management, referring to periods when the CLO securities can’t be refinanced.

US banks, one of the biggest buyers of AAA rated CLOs last year, have pulled back from purchasing the securities this year, while some Japanese lenders have been ramping up. But the Asian investors haven’t been buying enough to fill the void.

On the other hand, equity investors, which hold the riskiest portion of deals and receive the difference between leveraged loan yields and CLO bond yields, are finding the deals attractive as they can lock in solid returns for years. In some cases, the CLO’s liabilities can be refinanced in as soon as a year, which only increases the potential gains.

“If you were fortunate enough to line up a print-and-sprint and lock in AAAs in the past couple weeks, the resulting CLO equity could be one of the best new issues so far this year,” said Dan Ko, principal and portfolio manager at Eagle Point Credit Management.

But there are costs.

“If you can move swiftly, there can be much upside if and when the market recovers,” said David Nochimowski, head of global CLO and ABS strategy at BNP Paribas. But the deals also tend to be financed with more debt relative to equity, meaning equity investors can suffer more when default rates rise.

Speedily sourcing enough loans can also be tricky. If a manager prices a CLO with bond prices locked in, and loan prices move higher afterward, the deal becomes a troubled one out the gate. The problem is acute in the smaller and less liquid European market, which is why print-and-sprint deals are such a rarity there.

“Not all managers are able to do print-and-sprints,” said Gretchen Bergstresser, partner and global head of performing credit at CVC Credit Partners. “The capital markets aren’t always open to everyone. We were able to take advantage of lower loan prices and issue a European CLO in March despite challenging conditions.”

Meanwhile, “quasi” print-and-sprint deals are also cropping up, where secondary market loans are purchased in addition to older loans that were bought earlier in the year and financed with bank lines. Eagle Point’s Ko describes these as “a jog, print-and-sprint.”

Bain Capital’s recent $396.5 million CLO was one such transaction. CVC also worked on a quasi-deal in Europe earlier this year, and Napier Park Global is said to have done the same both in Europe and the US this spring.

Representatives for Bain, AGL and Napier Park declined to comment.