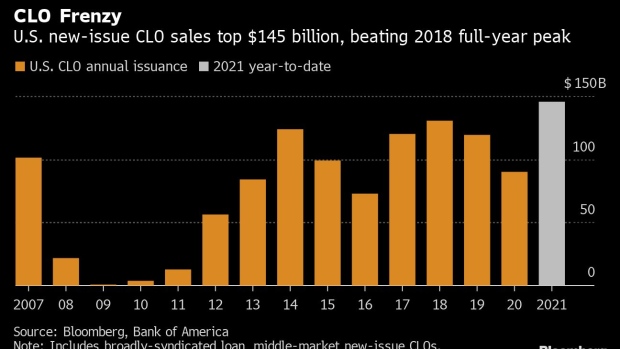 (Bloomberg) -- The record-setting pace of collateralized loan obligation sales is poised to kick into high gear as issuers get ahead of next year’s potentially messy transition to a new benchmark.

The London interbank offered rate must be retired for new leveraged loans -- the building blocks of CLOs -- by Dec. 31. That’s expected to cause volatility in 2022 as CLOs seek new benchmarks for the loans they repackage and bonds they sell for funding.

“A CLO would likely have to price in late November to close by the end of December,” Barclays analysts led by Bradley Rogoff said in a recent note. “With warehouses currently at record levels, there should be no shortage of CLOs attempting to close ahead of the end-of-year deadline in order to have liabilities match the vast majority of assets from a reference-rate perspective.”

Some AAA investors, including banks, are telling managers they do not want to take a chance on Libor CLOs that may take until January to close, according to Barclays. CLOs frequently raise flags from regulators and legislators, and market participants are keen to avoid negative headlines about missing deadlines, the analysts said.

In addition, CLOs aren’t rushing to be first to flip to new benchmarks like the Secured Overnight Financing Rate, the analysts note. “Uncertainty about operational risk, potential spread discounts, and asset-liability mismatches may lead some managers to prefer to close deals in 2021 rather than 2022,” they wrote.

The transition could aggravate CLO basis risk by causing a mismatch between the benchmarks used for liabilities and assets. CLOs already suffer from this, since most leveraged loans are pegged to one-month Libor, while CLOs priced off the three-month maturity.

CLO prices could become more volatile during the shift from Libor. There’s also a chance of reduced returns to CLO equity holders, who hold the riskiest slice of a deal.

Morgan Stanley analysts said this week that SOFR-linked loan issuance will continue to grow into year-end, but the market should not expect any SOFR-linked CLOs until 2022. CLO issuance is not expected to pick up materially until a larger portion of the loan market is SOFR-linked, which should happen by around the second quarter, analysts led by Charlie Wu said.

T. Rowe Price Group Inc. agreed to buy Oak Hill Advisors -- one of the biggest players in alternative credit -- for about $4.2 billion, to expand into private debt investing

Slovak lender 365 Bank decided not to proceed with its euro-denominated bond sale, after starting to market the senior preferred notes on Thursday.

China Evergrande Group’s next bond payment deadline is fast approaching as investors scrutinize the developer for clues on the severity of a cash crunch that’s eroding confidence in other highly indebted peers.