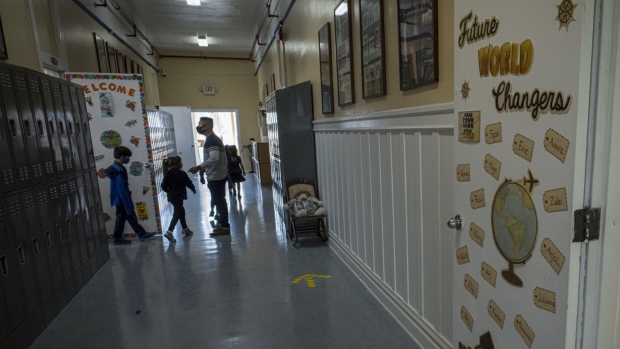 (Bloomberg) -- Banning small gatherings and closing schools are some of the most effective ways to halt Covid-19’s spread, a new study found at a time when many countries are trying to keep students in class and use a scattering of measures that fall short of a lockdown.

Researchers from the Medical University of Vienna used four different approaches to analyze the impact of government interventions on how fast the virus spread in several countries and U.S. states in March and April, at the height of the first coronavirus wave.

The scientists sought to disentangle measures that were used in combination to determine which worked best and identify a “smaller package” that could yield results, averting the economic and social pain caused by a full lockdown. Restricting smaller numbers of people from meeting was found to be more effective than canceling large gatherings.

The findings on school closures support other recent data, notably a U.S. study, the authors said. But because of the impact on learning and social isolation, “governments may have to look toward less stringent measures, encompassing maximum effective prevention but enabling an acceptable balance between benefits and drawbacks,” they wrote.

Few governments in Europe have closed schools despite the latest resurgence. In New Yorks City, they may be poised to shut again soon.

Some of the other containment methods that emerged as most effective in the study were border restrictions, increased availability of protective equipment and restrictions on individual movement. Enhancing lab testing capacity and increasing isolation and quarantine facilities ranked among the least effective, as did airport health checks.

The findings were published in the scientific journal Nature Human Behaviour on Monday.