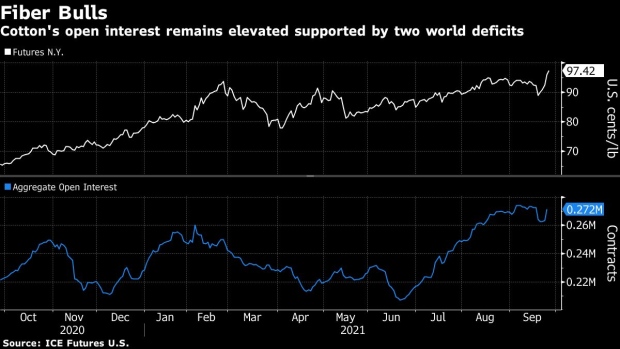 (Bloomberg) -- High cotton prices are shaking up futures markets, igniting a short squeeze in the New York exchange and signaling higher costs for makers of T-shirts and other apparel.

Heavy rains are threatening crops in major U.S. growing regions including Texas and the Mississippi Delta, according to Maxar Technologies Inc.’ senior meteorologist Donald Keeney. The U.S. is the world’s biggest cotton exporter. At the same time, overseas shipments are flowing with demand rising in China, the top user, and buyers like Turkey and Pakistan are looking for product as well.

Futures are on a tear, nearly touching $1 a pound, a level not seen since 2011. The higher prices mean that the costs to make clothing are on the rise, which retailers may try to pass to consumers. In the U.S. at least, that will be difficult, with discretionary spending constrained by the pandemic and stagnant wages, said Peter Egli, the Chicago-based director for Plexus Cotton Ltd. Higher clothing prices may curb demand.

The rising futures are also catching some traders with substantial short positions on ICE U.S. exchange, pushing up prices even more.

“This is a classic short squeeze,” said Egli. “The trade is short.”

Cotton for December delivery rose as much as 4% to 99.86 cents a pound in New York, before paring gains. The commodity is up for a fifth session and has surged 48% in the past year amid projections for two straight world deficits through 2021-22.

More gains could be in store with more large outstanding short positions in the market, according to O.A. Cleveland, a Mississippi State University economics professor emeritus, and consultant. Short mills should have fixed prices when futures dropped earlier this month, he said. Their short positions “continue to keep a fire burning under prices.”

In the shorter term, shipping constraints are also helping cotton’s rally. The U.S. had a small crop last year, and “it is not easy to get cotton to mills in short order,” said Jon Devine, economist for North Carolina-based researcher Cotton Inc.

China has been buying more American supplies recent weeks and the “raw-fiber equivalence of cotton estimated to be contained in U.S. apparel imports has been occurring at the highest rate since the 2010-11 price spike” when futures reached record highs, he said.