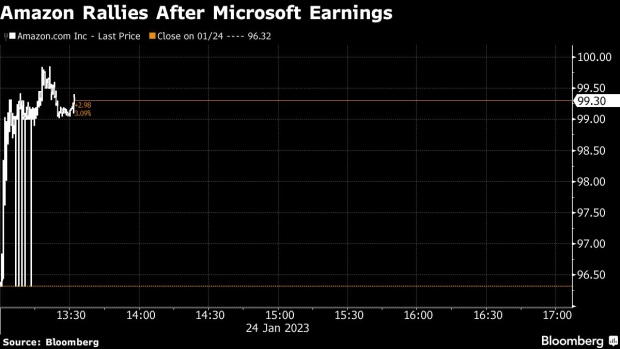 (Bloomberg) -- The shares of companies involved in cloud computing slumped late on Tuesday after Microsoft Corp.’s results rattled nerves with a disappointing forecast.

MongoDB Inc., Datadog Inc. and Snowflake Inc. were among stocks that jumped more than 4% in extended trading, after sales in Microsoft’s cloud division exceeded the average analyst estimate. However, the stocks turned negative after Microsoft said growth in its Azure cloud-computing business will decelerate by 4 or 5 percentage points in the current quarter.

Amazon.com Inc., which owns the largest provider of over-the-internet computing, fell about 2% in postmarket trading after initially rallying as much as 3.7%.

Investors have been focused on the health of web services spending amid slowing revenue growth. Shares of Microsoft fell as much as 1.5% after giving up initial gains.

(Updates share prices throughout and adds details on Microsoft’s forecast.)