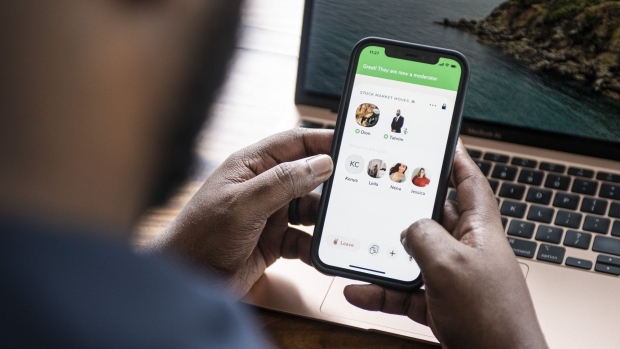 (Bloomberg) -- Clubhouse, the voice chat app that captured the attention of Hollywood and Silicon Valley early in the pandemic, is experimenting with a new feature that lets users join private groups. Testing of the tool has expanded in recent weeks, around the same time that Clubhouse reduced headcount and embarked on a change in strategy.

The feature, which previously went by the name Social Clubs and is now known as Houses, appeared on some users’ phones in recent weeks, said people who shared screenshots of their apps with Bloomberg. A Bloomberg reporter also used a version of the feature on the app. On Wednesday, the functionality appeared to be removed from some phones after Bloomberg requested comment from Clubhouse, but it remained active for other users.

Here’s how the Houses feature works: In addition to Clubhouse’s main “hallway” of rooms, which anyone can join as a listener, members of a House can see an additional set of active conversations not available to general users. In those rooms, all participants can unmute themselves and speak, whereas in most standard rooms, a moderator must give someone permission to talk.

With Houses, Clubhouse appears to be encouraging friendlier social interaction within private groups of users. Instead of only live, ephemeral audio rooms, members of a House can post in a written group chat, where messages stay visible for a week before disappearing. New members are encouraged to write a post introducing themselves. “Houses are private hallways where you can see more of  your favorite people and get to know friends-of-friends,” according to a description of the feature within the app.

It’s unclear how integral the feature is to what Clubhouse is billing internally as a forthcoming strategy shift. A spokeswoman for the company declined to comment.

Clubhouse was created in 2020 and saw a sudden boom in popularity that coincided with Covid-19 lockdowns. The app lets people host casual, live audio discussions and became a home for conference-like talks and celebrity drop-ins — as well as some conversations that spun out of control and led to hateful content. Investors valued the business at $4 billion last year, but downloads soon began to flag. And it eventually found some new audiences overseas.

Clubhouse’s monthly downloads peaked in February 2021 for iOS users at 9.6 million, and hit a high in June 2021 for Android users at 6.8 million. Last month, those download rates were each less than 300,000 according to mobile app analysis firm SensorTower Inc.

Paul Davison, the co-founder and chief executive officer, said last year that the app grew “way, way too fast” in its initial months. Davison, who has a background in creating trendy social apps, has a constant drive to experiment, as well as a belief that bringing people together with digital tools will create good in the world, former colleagues have said. He has talked in the past about Clubhouse potentially providing a platform for human gatherings of many kinds, including company all-hands meeting and political rallies.

Clubhouse is still trying to establish what exactly it’s about right now. The job cuts last month were a retreat from general interest programming, such as international, news and sports, Bloomberg reported. The latest experiment highlights the company’s interest in social networking.