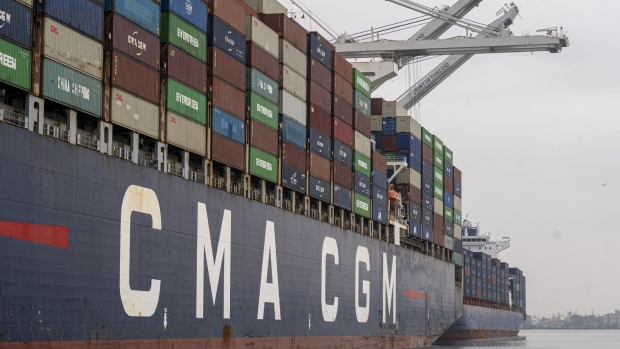 The CMA CGM Andromeda container ship at the Port of Oakland in Oakland, California, U.S., on Friday, Nov. 19, 2021. After dealing with supply-chain issues of its own over the summer, California's Port of Oakland is now ready to be put to use to help shore up the crisis, its Maritime Director Bryan Brandes said last month. , Bloomberg

The acquisition gives CMA CGM a gateway on the U.S. east coast and strengthens its position as global port terminal operator, the company said Wednesday, confirming an earlier Bloomberg News report. Financial details for the transaction to buy the terminals in the state of New York and New Jersey weren’t disclosed.

The deal “is a strategic investment,” Chief Executive Officer Rodolphe Saade said in a statement. “It reinforces the services we provide to U.S. customers and their supply chain efficiency.”

CMA CGM has built out its position in the US in recent years to grow in one of the world’s biggest economic regions. Last November, it agreed to buy the rest of Fenix Marine Services, which operates a container terminal in the Port of Los Angeles, after owning a minority stake. Last month, the company said former Ports America executive Peter Levesque would succeed Ed Aldridge as president of CMA CGM America.

The Port of New York and New Jersey is a key entry point serving the northeastern U.S. supply chain areas and represents CMA CGM’s largest gateway on the U.S. east and gulf coasts, according to the statement. The Bayonne and New York terminals have an existing combined capacity of 2 million TEUs — a measure for container handling capacity — per year and potential for further expansion, CMA CGM said.

Bayonne terminal has the highest level of automation and the fastest truck turn time in the harbor, CMA CGM said.