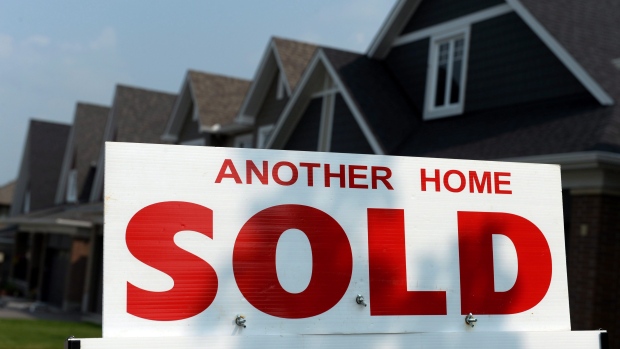 A for sale sign displays a sold home in a development in Ottawa real estate homes housing market houses , The Canadian Press

Canada's housing agency is raising the alarm over the country's real estate sector, warning about a strong risk of problems on the horizon.

Canada Mortgage and Housing Corp. will increase the risk rating in its overall assessment of the country's residential market to "strong" from "moderate" when it issues a new report on Oct. 26.

"CMHC has recently observed spillover effects from Vancouver and Toronto into nearby markets," CMHC chief executive officer Evan Siddall said in an opinion column in The Globe and Mail. "These factors will be reflected in our forthcoming Housing Market Assessment on Oct. 26. They will cause us to issue our first 'red' warning for the Canadian housing market as a whole."

CMHC's decision to issue the red alert has been months in the making. Under the agency's analysis that looks for "evidence of problematic conditions," it rates 15 metropolitan markets based on weak (green), moderate (yellow) or strong (red) risk signals.

"High levels of indebtedness coupled with elevated house prices are often followed by economic contractions," Mr. Siddall said. "We expect Mr. Morneau's actions therefore to support our economy. Seen this way, the resulting delay in when people can purchase their first home, or their decision to buy a smaller home, rent or stay put is rather a small price to pay."

In July, CMHC increased its warning for Canada as a whole from weak to moderate. The Vancouver region has come under increased scrutiny this year.

The federal Crown corporation changed its quarterly rating on the Vancouver area to moderate in April and to strong in July.

The federal agency looks at four key areas of concern: "Overheating, price acceleration, overvaluation and overbuilding." It cautioned in July that the country's residential markets as a whole already displayed strong signs of being overvalued.

"House prices across Canada remain higher than levels consistent with personal disposable income, population growth and other fundamental factors," CMHC said in July. It added that the risk of problematic conditions would increase "if the acceleration in prices intensifies in Ontario and British Columbia so as to outweigh challenges in the oil-dependent provinces."

The B.C. government announced a 15-per-cent tax on purchases by foreign home buyers in the Vancouver region, effective Aug. 2.

WEIGH IN: Are you cutting back on discretionary spending due to Canada’s new mortgage rules? https://t.co/GELCo0yTd6

Property sales last month in Greater Vancouver dropped 32.6 per cent from a year earlier, as the housing market adjusts to the impact from the B.C. tax on home buyers in the Vancouver area who are not Canadian citizens or permanent residents.

By contrast, residential sales in the Greater Toronto Area jumped 21.5 per cent in September, compared with the same month last year.