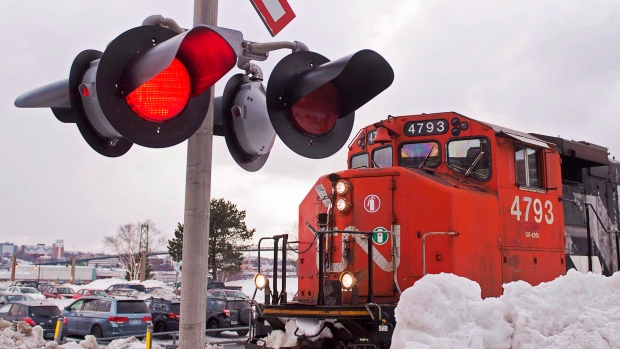 Canadian National Railway Co. is raising its quarterly dividend 10 per cent as it anticipates annual double-digit earnings growth for the next five years.

The country's largest railway says it will pay 45.5 cents per common share on March 29, to shareholders of record on March 8.

"We remain confident in our ability to deliver for our valued customers, while positioning CN for long-term success," he said during a conference call.

Revenues increased two per cent in the quarter ending Dec. 31 to $3.28 billion.

"This harsher winter, coupled with higher volumes in certain segments of our network, has had a greater impact on overall velocity and productivity than we have seen in the previous three years," he told analysts.

He said volume was helped by a doubling of frac sand and double-digit increases in crude oil, intermodal, automotive and fertilizers.

The railway has been hiring staff and expects to have 400 more conductors available in the first quarter.

It plans to spend a record $3.2 billion in 2018, including $700 million for the acquisition of 60 new locomotives, track infrastructure expansion and intermodal terminal improvements.

Track infrastructure maintenance will get $1.6 billion and about $400 million for the installation of positive train control in the United States.

Daniel Sherman of Edward Jones said the railway's focus on growth over cutting costs makes it a good long-term investment.

"CN is focusing on its value proposition and how it fits into the supply chain of its customers, expanding capacity where it has an advantage and using new technology to better position itself for future business," he wrote in a report.

For the full year, revenues were up eight per cent to $13 billion.