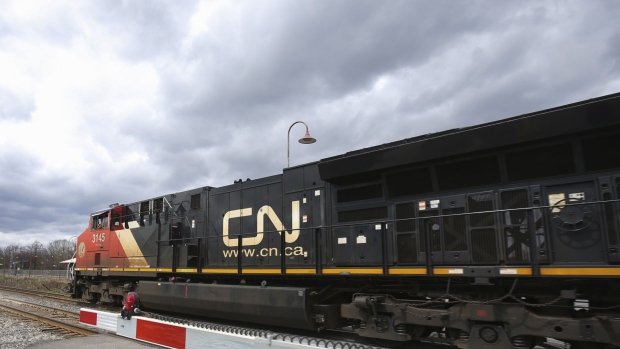 (Bloomberg) -- Canadian National Railway Co. expects hydrogen shipments in tank cars could grow to the size of the crude-by-rail business as energy companies plan to ramp up production of the clean-burning gas.

Companies including Air Products & Chemicals Inc., Suncor Energy Inc. and ATCO Ltd. have announced plans to build hydrogen-production plants in Alberta that would use carbon capture and storage to reduce or zero out carbon emissions.

Hydrogen has emerged as a promising fuel in the transition to cleaner energy because of its potential use in everything from heavy industry to aviation, though large-scale production without any or little carbon emissions is still incipient.

In Canada, the push toward hydrogen is part of an effort to slash the higher-than-normal emissions associated with the country’s oil sands, the world’s third-largest oil reserves.

“I am most enthusiastic about our new green energy carloads related to Alberta’s massive growth in hydrogen energy projects evidenced by the slew of recent announcements,” James Cairns, senior vice president of rail centric-supply chain, said in a conference call yesterday. “This could be of the scale of crude by rail.”

As Canadian oil output has exceeded the capacity of pipeline’s to export it, energy companies have turned to rail as a way to transport the oil to refineries. But the business has been volatile for rail companies as volumes of crude-by-rail shipments have sometimes plummeted when oil-market downturns prompted companies to reduce output or new pipeline capacity was added.