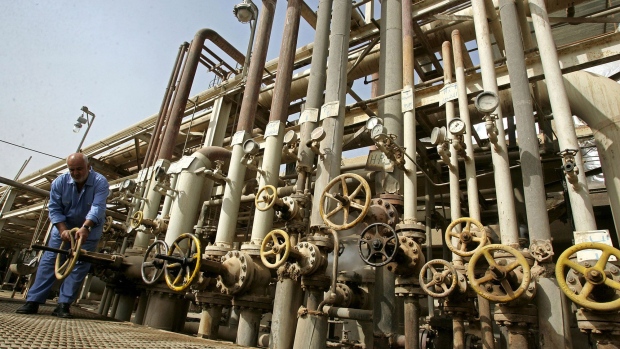 BAGHDAD, IRAQ - NOVEMBER 5: An Iraqi worker adjusts a control valves at the Daura oil refinery on November 5, 2009 in Baghdad, Iraq. Iraq and a grouping of U.S and European oil companies Exxon Mobil Corp and Royal Dutch Shell PLC signed a $50 billion contract today to develop the West Qurna oilfield, two days after the Iraqi South Oil Company signed a technical service contract with Britain's BP and China's CNPC to develop the Rumaila oilfield. The Iraqi government is trying to attract foreign investment, especially in the oil sector, in hopes of reviving its war-torn economy. Iraq has the third largest oil reserve in the world but it is producing way below its potential. (Photo by Muhannad Fala'ah/Getty Images) , Photographer: Muhannad Fala'ah/Getty Images Europe

(Bloomberg) -- China’s oil giants China National Petroleum Corp. and CNOOC Ltd. are considering acquiring Exxon Mobil Corp.’s remaining stake in an oil field in Iraq, which could fetch at least $500 million, according to people familiar with the matter.

The Chinese state-owned firms are weighing a potential deal to buy the 32.7% stake in Iraq’s West Qurna 1 field held by Exxon, the people said, asking not to be identified as the matter is private.

A stake sale would mark Exxon’s exit of West Qurna 1 field, where it was once the dominant player and remains the lead contractor. In 2010, it signed an agreement with a company of Iraq’s Ministry of Oil to rehabilitate and redevelop the oil field in the southern part of the country, according to Exxon’s website. Three years later, Exxon struck a deal with PetroChina, CNPC’s listed unit, and PT Pertamina for stakes in the asset.

PetroChina currently holds 32.7% of the West Qurna 1 field, while Itochu Corp. owns about 19.6% and Pertamina and Hindustan Oil Exploration Co. are also among the shareholders, according to Itochu’s website.

No final decisions have been made and there is no guarantee the deliberations will lead to a deal, the people said. Geopolitical risks in Iraq could bring uncertainties to any potential agreement, they added. Representatives for Cnooc, Exxon and CNPC declined to comment.

Iraq awarded a contract to develop the West Qurna oilfield to Exxon and Royal Dutch Shell Plc in 2009. The oilfield is one of the world’s largest with expected recoverable reserves of over 20 billion barrels, according to Itochu’s website. The site produces slightly below 500,000 barrels a day, one of the people said.

The U.S. plans to accelerate a drawdown of U.S. troops in both Iraq and Afghanistan to 2,500 in each nation, the Acting Secretary of Defense announced Tuesday at the Pentagon, as President Donald Trump works to deliver on his longtime pledge to exit from “endless wars” before he leaves office in January. The order would reduce troops from about 4,500 in Afghanistan and from about 3,000 in Iraq.