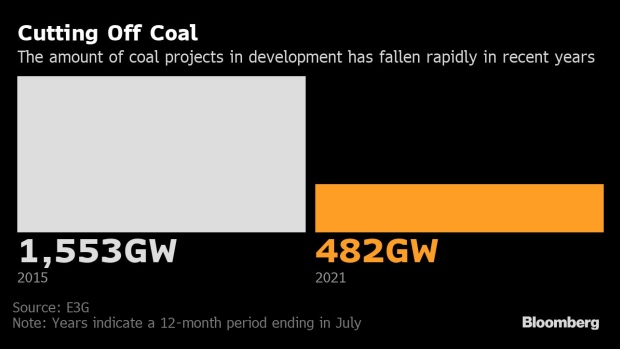 A Caterpillar Inc. bulldozer operates on a coal mound at the Alpha Natural Resources Inc. Mammoth Preparation Plant in London, West Virginia, U.S., on Wednesday, July 18, 2018. The coal industry is likely to confront a much less threatening emissions rule from President Donald Trump's EPA, which is seeking to repeal and replace the Obama-era Clean Power Plan. Photographer: Luke Sharrett/Bloomberg , Bloomberg

(Bloomberg) -- Coal might be the dirtiest word in climate politics in the run up to the United Nations COP26 summit, but that doesn’t mean financing for it has dried up.

A total of $42 billion was committed to financing coal-fired power plants from 2013 to 2019 in 18 nations with the biggest percentage of population without electricity, or so-called high-impact countries, according to a report from the groups Sustainable Finance for All and Climate Policy Initiatives. Bangladesh, India and Pakistan received the majority of investment.

The report highlights that while plans for coal power plants are being scrapped rapidly across the world, there is still support in some less-developed countries. Earlier this week, climate think tank E3G said that the world’s pipeline of new coal stations had declined almost 70% since 2015. Phasing out coal is seen as a key priority for climate talks in Glasgow in six weeks time.

“Investment in new coal-fired power plants persists globally despite misalignment with a net-zero economy and the falling costs of renewable energy technologies,” the report’s authors said.

Financial institutions in China are responsible for 40% of coal funding in the HICs. Globally, privately held institutions based in the U.S. finance the bulk of investment in the industry, according to the report.

New coal plants are at risk of becoming stranded assets -- where they’re retired before paying for themselves -- given infrastructure constraints and lower-than-expected demand, according to the report.