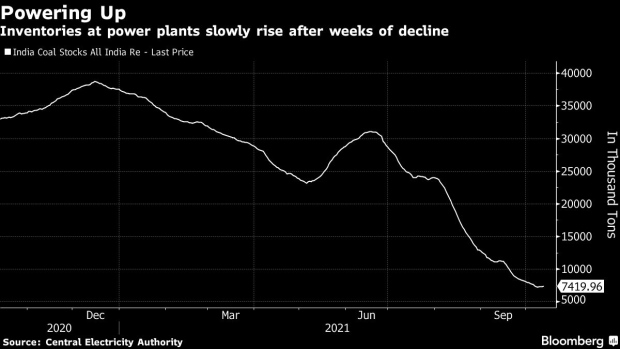 The move to prioritize supplies to power plants is aimed at helping boost depleted inventories that are putting continued operations at risk. But it could worsen the situation for other industries such as aluminum smelters, cement producers and steel mills, leaving them with a difficult choice of looking for costlier options or slashing production.

Industrial activity from China to Europe is taking a beating as fuel prices soar and governments curtail power to large users to prioritize supplies for homes. In India, an economic recovery has sent demand for electricity soaring just as the supply of coal slumps.

“This is only a temporary prioritization,” Coal India said in a text message. “Once the situation stabilizes, expected within a short time, and stocks at coal-fired plants attain a comfort level, other sectors will be brought back to their regular supply norm.”

Inventories of coal, which helps produce about 70% of India’s power, have plummeted at power stations, with states from Uttar Pradesh to Rajasthan and Kerala hit by blackouts over the weekend. Typically, about three-quarters of Coal India’s sales go to grid-connected power stations, while the remainder is taken by other industries.

“Coal India needs to ramp up production pretty fast. That’s the only way we can get out of it,” said Rahul Jain, an analyst at Systematix Shares & Stocks in Mumbai. “The non-power consumers pay a premium to Coal India and it’s in the interest of the miner to restore supplies to them.”

Rains have mostly receded in mining regions, which should help increase output and shipments, while electricity demand is expected to come down as the winter approaches, freeing up more coal for other users.

Coal India has said previously it’s counting on workers and truck drivers to return next week from local holidays to help accelerate production and shipments.

The company has supplied 1.6 million tons daily of the fuel to electricity producers over the past four days. Reserves have started to slowly rise after more than three weeks of daily declines.

(Updates with quote from analyst in sixth paragraph)