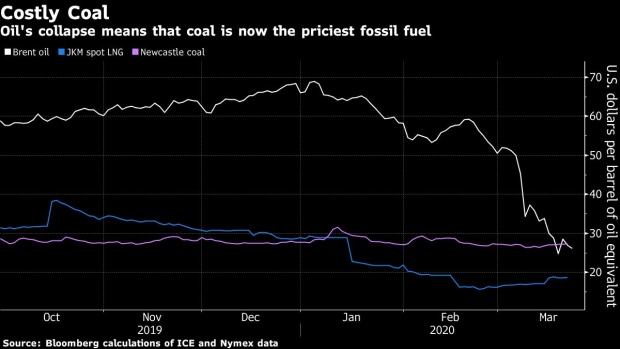 (Bloomberg) -- Coal, the dirtiest and usually the cheapest option for energy, is now the world’s most expensive fossil fuel.

Oil’s epic collapse over the past month means the global crude benchmark is now priced below the most widely traded coal contract on an energy-equivalent basis, according to Bloomberg calculations. Australia’s Newcastle coal on ICE Futures Europe settled at $66.85 a metric ton on Friday, the equivalent of $27.36 a barrel of oil. Brent futures ended at $26.98 a barrel.

While coal use in the U.S. and Europe has fallen because of cheap natural gas and renewables, as well as flat energy demand growth, consumption continues to rise in Asia, where it’s traditionally been the cheapest option for energy-hungry emerging markets. It’s also the dirtiest fossil fuel, emitting about twice as much carbon dioxide as natural gas and 30% more than gasoline when burned.

The new top price ranking, which is more a function of the sudden drop in crude prices than a surge in coal demand, must be sustained to incentivize switching plants and investments away from coal. In the short term, coal use in Japan could fall marginally this summer in favor of cheaper LNG, according to Goldman Sachs Group Inc.

The Newcastle contract represents coal for power generation use, which mostly has different supply and demand fundamentals than the oil market. Flight cancellations and travel restrictions may have slashed global petroleum use by as much as 20%, while Saudi Arabia and Russia are about to flood the market with extra supplies. That’s sent Brent down about 60% since the start of the year. Power markets in Asia that are the biggest customers for seaborne coal have been more resilient.

Newcastle coal, which is priced at Australia’s main loading port, has already been trading on an energy-equivalent basis above the Japan-Korea marker, the benchmark for liquefied natural gas in Asia, for most of this year.