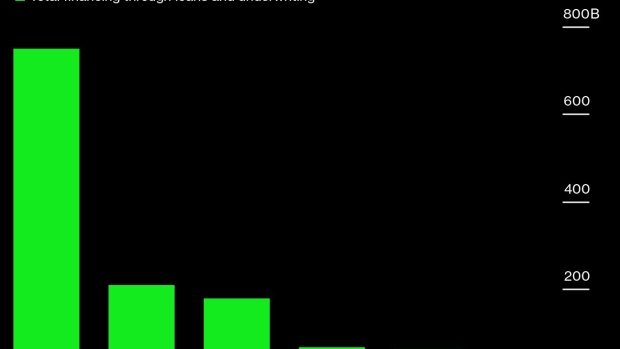 A pile of coal at Karya Citra Nusantara (KCN) Marunda Port in Jakarta, Indonesia, on Wednesday, Jan. 19, 2022. Indonesia, the top thermal coal exporter, will keep a broad ban on January shipments in place even as exemptions have allowed some fuel-laden vessels to depart. , Bloomberg

(Bloomberg) -- The dirtiest fossil fuel is still raising trillions of dollars of funding, despite finance industry pledges to back net zero carbon targets by the middle of the century.

Commercial banks have channeled more than $1.5 trillion across the coal supply chain since the start of 2019, according to a report from German researcher Urgewald and its partners. The findings come just over three months after dozens of banks joined Mark Carney’s global alliance to achieve net-zero emissions from finance.

“What we’re seeing is the tip of the iceberg,” said Heffa Schuecking, founder of Urgewald, in an interview. “This is a clear sign that companies aren’t transitioning.”

The study comes with the world burning more coal than ever as the economy bounces back from Covid-19, raising fears that 2022 could be a year of backsliding for some climate initiatives.

Still, there were some signs of a drop in financing during 2020 and 2021, though it wasn’t clear if that was the start of a trend or just the impact of the pandemic on the economy, according to Katrin Ganswindt, head of financial research at Urgewald.

Institutional investors have combined holdings of more than $1.2 trillion in the coal industry. BlackRock Inc. and Vanguard Group Inc. are the two largest, with share and bond holdings of over $100 billion each, according to the report. Both firms are members of the Net Zero Asset Managers Initiative.

There’s growing concern that coal plants could be left as stranded assets during the green transition, with countries favoring renewable power sources. Yet the report’s findings show that banks and asset managers still see opportunities to make a return.

“Vast amounts of cash are provided to an industry that is our climate’s worst enemy,” said Ganswindt.